Zynga has introduced a new buildable in Treasure Isle: the Ancient Relic, or the Tiki Lost Relic, so soon after the Pirate Ship. You will once again need your friends in order to build this huge structure, but it will certainly be worth the trouble, since there are bonuses to be found. Read on to find out everything about the Treasure Isle Ancient Relic!

What is the Ancient Relic?

It is a new buildable structure (and a really complex one since it’s built in four stages!) that, once completed, will give you all sorts of cool daily rewards!

How to get the Treasure Isle Ancient Relic?

As I’ve said, you will have to build it and you’ll receive its base for free when you log in to the game, and you’ll see a pop-up message telling you that you’ve been given a lost relic and you can place it on your Island. In order to have this masterpiece done, you’ll have to dig up the parts you need, get them as gifts from your friends or simply purchase them for Island Cash. 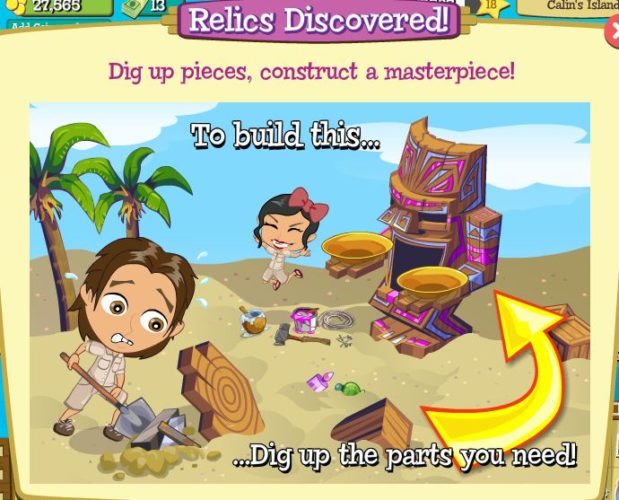 There are five different types of materials you need to build the Treasure Isle ancient relic. These are:

Therefore, you need 10 of each material in order to complete the Tiki Relic, which might be pretty discouraging for some…

Have you built your Ancient Relic? If so, what prizes did you collect?