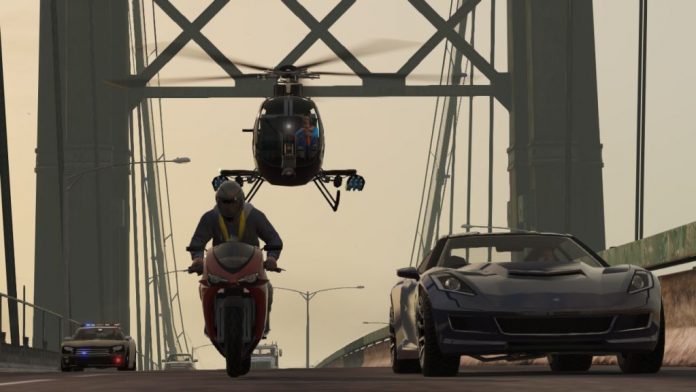 So you’re playing GTA Online and you rob a convenience store, blasting the bottles and magazines behind the shop assistant to speed the process along while yelling nonsense into your mic. You grab the plastic bag full of cash and start backing out the door, gun still trained on the guy behind the counter. Out of no-where he shouts “I refuse to be victimized!” and pulls out a handgun. You fire a shot in panic and miss – he ducks down behind the counter and starts blind-firing at you, so you slide over the bonnet of your car and duck down behind it. Pulling out your pistol, you wait for him to pop his head up and BANG, you end his poor virtual life. Your buddy shouts for you to get in the car. You just pull away as the first helicopter from your 3 star wanted level arrives on the scene. What do you do now?

You need to get away from the area and get out of sight of the cops so you can put your mask on/take your mask off and drop down to 2 stars, but that’s a lot easier said than done. Remember, if there’s more than one of you in the car then you’ll need to get out to put your mask on or take it off – otherwise you’ll just get pulled back up to your previous star level by anyone in the car who doesn’t swap their masks at the exact same time as you, which also makes mask changes useless for the rest of that chase.

If you’re in the city then you’ve got a lot of things on your side. The tall buildings of central Los Santos can slow down pursuing helicopters, especially if you make a lot of direction changes and go through every alley you can. Swapping cars is a good tactic in single player, but the police will come after you with at least one star if they see you in a stolen vehicle, so it’s best to get away in your own ride. Tunnels are the absolute best you can hope for – if you’re on a motorbike then you could do a lot worse than ride down the stairs into the first subway station that you see, then on to the tracks and along the line to the next station. If you’re in a car then find some train lines and follow them along until they drop underground – a good place for this is near Grove Street, down in the South-East of the city. If you’re no-where near any tunnels then try driving underneath highways – just get something above you and between you and the helicopter. If you’ve got the weaponry for it you can always try taking out the helicopter to give you a few seconds to slip away. Driving through oncoming traffic can slow down any police cars and give you those vital extra seconds you need to break line of sight, and highway junctions give you many different directions in which to escape, meaning that even if the police are approaching from two or three directions, you probably still have the time to get to an alternate escape route. Just remember – you and anyone else in the car need to put your mask on as soon as you’ve got a couple of seconds respite from the all-seeing eyes of the law.

There aren’t many tall buildings out in the country and only a few railway and road tunnels, so your best bet is to go off-road, and to go off-road as fast as you possibly can. Areas with fairly steep hills leading up to plateaus are by far the best, as police cars will have a hard time following you and you will be able to go fast enough to break away from the view of the helicopter. Failing that, heading up a mountain along one of the ridges and then back down the other side at high speeds can help you get away – the change of altitude is too much for the helicopter to easily keep up with, so as long as you don’t crash into a tree or a creek when you get to the bottom you should be able to break line of sight for long enough to get your mask on. Another viable tactic for the countryside is to head for somewhere like the abandoned motel in Sandy Shores and go on-foot. If you can get into one of the rooms and duck down the police can sometimes lose you for the time you need to put your mask on or take it off. One thing that not many people know is that you can lose the police by diving underwater – if there’s a helicopter above they won’t be fooled, but cops on foot can often be evaded. You can also hide in bushes from police cars by standing in a bush and entering stealth mode, though this is quite hit and miss and seems less likely to work on police who are on-foot.

Once you’re down to two stars it’s fairly simple to escape the police – just keep an eye on the mini-map and be careful to avoid the routes they’re taking. You can use the expanded map, which you can bring up by pressing down twice on the d-pad, in order to see police locations much further away. Find a hole and charge for it full throttle – but whatever you do, do not kill any police, as the chase will immediately escalate back up to 3 stars. The Los Santos customs garages work in much the same way as the pay and sprays of old GTA games – just cruise into one when the cops have momentarily lost you, respray your car and cruise out like you don’t have $1500 of blood money sitting in your pocket. I would also advise dumping any stolen cars as soon as possible, as sometimes police will remember that they were just chasing you and your wanted level will jump back up to what it was previously rather than the 1 star you usually get for cruising around in a stolen vehicle.