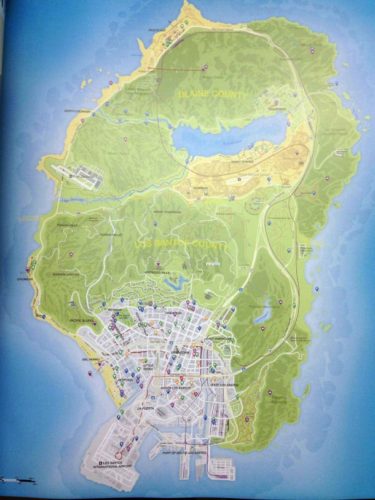 Seven days. To the majority of those inhabiting the earth, it is but a simple week; to us in the gaming universe, a lifetime of agony with each day tantalizing us until the game anticipated is in our grasp. The game in question: Grand Theft Auto V.

Ever since the debut trailer left gaming fans enthralled two years ago, the countdown began for its eminent release into stores. Every subsequent trailer, screenshot and piece of information made available was devoured by gamers everywhere. Rumors, news and leaks were all treated as the gospel. And now (SPOILER ALERT!) here’s yet another leak to add to the mountain of awesome that is Grand Theft Auto V: the map (and boy is it huge!)

Discovered by the infamous NeoGAF, a map of Los Santos was leaked, uploaded to Reddit and shared throughout the internet. Many have wanted to know, like anything else related to GTA V, how expansive the map is. Remember when I said earlier that this map was huge? Take the map of Red Dead Redemption, Grand Theft Auto: San Andreas and Grand Theft Auto IV. Now smash those three together and you’ll have the relative size of Grand Theft Auto V. Still need a better idea of the magnitude? Check out the map below:

It’s no wonder Los Santos and Blaine County are so massive; there are 500 missions that are thrown into the capaign with 700+ missions to come when GTA Online goes live in October. This definitely has been on my most anticipated game list for a while now. Two years have just flown by so quickly. These last seven days…that is the real challenge.

So what do you guys think? Are you ready to discover the intense, entertaining and chaotic adventures Los Santos has in store for you? Grand Theft Auto V hits stores September 17 for Xbox 360 and Playstation 3. You may need someone to vouch for your absense at work after the game is released.