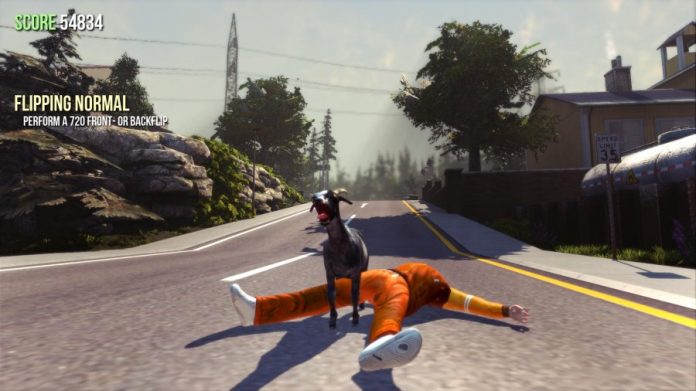 The indie, bug riddled, hit developed by Coffee Stain Studios, Goat Simulator, has announced a patch coming June 3rd. This patch will not be fixing any of the incredibly hilarious bugs. Instead, the patch will include more features.

Where most developers or publishers would make these features downloadable content, Coffee Stain Studios is offering them as free DLC. The first new feature will be the inclusion of local split screen multiplayer supporting up to four players. Now you can invite your friends over and get into crazy antics together on a single computer monitor.

In addition, there will be one new map estimated around the size of the original map. There are also new skins available for the goat with the update. These skins include tornado goat, a shopping cart, and a penguin, according to the new screenshots for the patch.

Players will also be able to ride bikes, skateboards and force human NPCs to ride you as well. This will make the half pipe and air tunnels on the original map a little bit more interesting.

The last addition in the patch is that players can wall run and balance on their front legs similar to a nose manual on a skateboard.