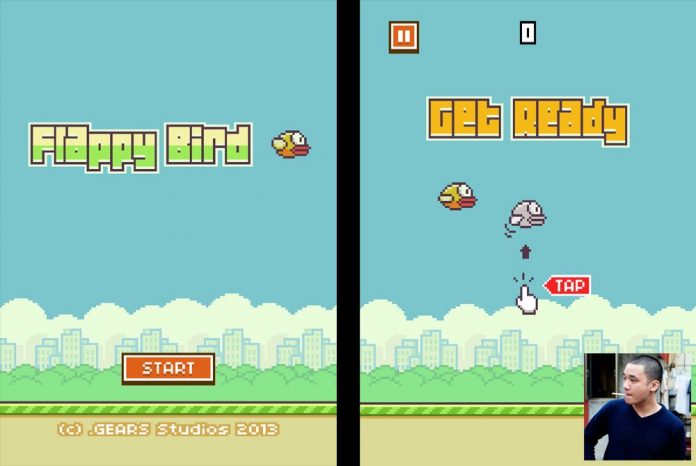 Can you hear that folks? Is it the beating wings of eternity? The steady rhythm of all existence? No. It’s a one-eyed pixel fish with wings flapping its way through an endless slalom of Super Mario pipes. But this isn’t a Miyamoto fever-dream, it’s Flappy Bird, and it has come to consume your very soul.

Flappy Bird is a touch-based game that has extremely simple game mechanics and aesthetics. Its gameplay revolves around a single mechanic of tapping on the screen to flap a bird avatar to keep it in the air and fly through openings structured with pipes without hitting them. Passing each pair of pipes gets you one point.

With Flappy Bird you don’t win; you simply play until you’re frustrated enough. And yet, it’s tapped into some primal sense of accomplishment for this; our attention-deficit world. Have nothing to do for more than a few moments? Try it out online. You’ll be dead in seconds with each attempt, and therefore the game can kill any span of time from half a minute to hours. 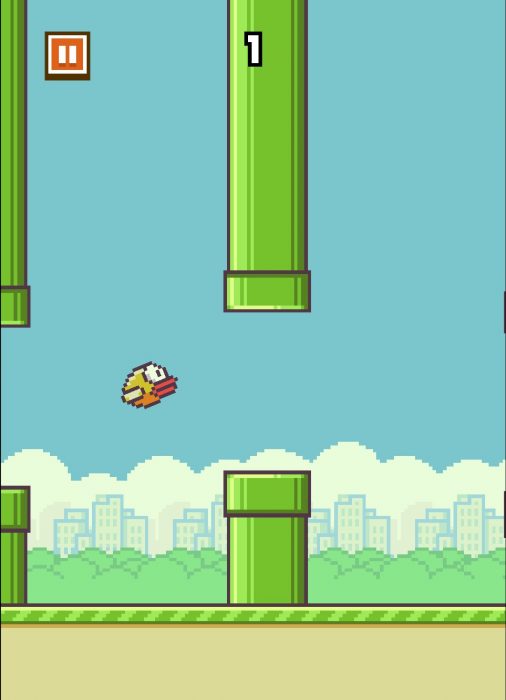 To play, you have to clear successive gaps at varying heights by propelling a leaden bird a few millimeters upward per tap. Let up and the bird nosedives like a cartoon bomb. Hit a pipe and it’s game over.

Flappy Bird has one level that goes on until the player loses and that can be replayed, one way to earn points, one type of obstacle which varies in height, one control-action, three birds, two backgrounds, and three medals that can be earned based on the number of points the player scores. The height that the player’s character rises when the screen is tapped is fixed.

Playing Flappy Bird is quite frustrating. You’ll start by hitting the first pipe. After several games you might be up to three or four points. Give it a few hours and you might top 20. You start to wonder if there really is method to the madness: “maybe tapping more regularly by counting?”, “what if I try double tapping?” This is the route to madness. There is no method here. It’s mostly luck and how good your reaction timing is. 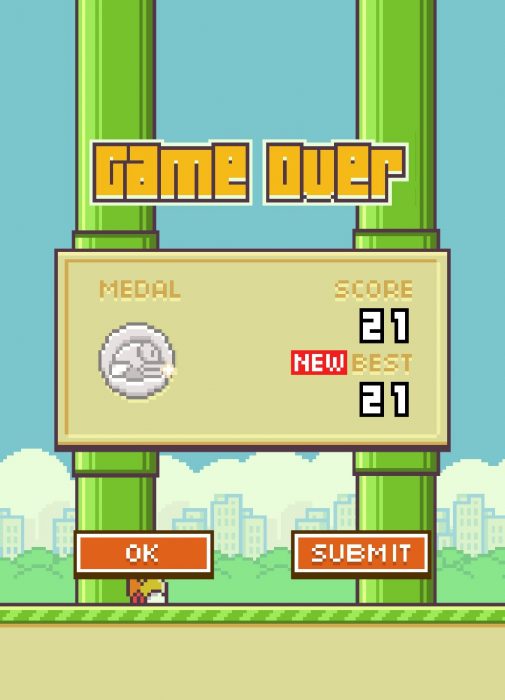 Each pipe-space cleared conjures a Mario-coin-snagging pling, raising your score by one. Achieving a certain high score awards users with a little silver Flappy Bird medal that does nothing except testify to your dogged dedication for the game. There’s also a leaderboard which requires you give the app posting permissions before access, and a little button to rate the game.

It might be easy to hate, but Flappy Bird manages to succeed at that classic Tetris design principle that has informed so many great video games that came after it – make it easy enough that anyone can figure it out on their own in seconds, yet challenging enough that it would take years of practice to master.

The design of the game design is brilliant in its simplicity. The visuals are reminiscent of Super Mario Bros and do not look at all good on Retina Displays. But it has a retro vibe about it that is a little kitsch or ironic maybe and suits the simple gameplay just fine. All you really see on the background is the blue sky, trees, buildings and the pipes. The green tunnels look exactly like the ones that Mario jumps in on Super Mario. And of course, you have that little bird with big eyes, red lips, yellow body and tiny wings. There’s nothing really striking with the graphics.

For starters, there isn’t much in the way of audio qualities. The game is silent, save for the rhythmic beating of wings, an obnoxious tone that sounds whenever you score a point, and a slapstick-ish thud heard when you crash into an obstruction. The absence of melody gives the game a lackadaisical feel, which sours the experience after a while.

Flappy Bird was designed and built by Dong Nguyen, a developer with the mobile studio .Gears. When it made its App Store debut on 05/24/2013, Flappy Bird became a global phenomenon. In less than a month after its release, Flappy Bird had at least 50 million downloads, and amassed nearly 16 million tweets. At one time it was the number-one free app in the U.S. App Store and the most-download app on Google Play. It’s safe to say Flappy Bird took over the web.

The rise to the top had been noted as extremely unusual and some speculated that bots may have been involved, Dong Nguyen, denied these claims and stated that everything had been “organic” regarding Flappy Bird.

After Flappy Bird went viral, Nguyen became concerned about the game’s addictive quality, and its success began to weigh down on him. Flappy Bird was designed to play in a few minutes when you are relaxed, but it happened to become an addictive product. It had become a problem. On 02/09/2014, Mr. Nguyen removed the game from Apple’s iOS store and Google Play, stating on Twitter that the game had “ruined his simple life”.

For the mobile version, there were no ad-free versions of the game, though it was revealed the game’s creator made $50,000 a day on ad revenues.

Also there were absolutely no in-app purchases, not even a different bird avatar, and after every other game, you would be prompted to let the app to publish on your Google+ account.

Flappy Bird is one of those games that hooks you by simply being frustratingly difficult. It may not be as much fun, but its no-frills approach and exacting, relentlessly repetitious gameplay make it an addictive distraction for the skill and score-obsessed.

If you’re still dying to play Flappy Bird, you have quite a few options. The game exists on several websites and there are countless Flappy Bird app clones out there.