Fame Town is a Facebook game that gives us the chance to be something that most likely we’ll never be: movie stars with tons of fans, humongous homes and millions of dollars in our pockets. And I guess that’s pretty much enough for a game to sound at least interesting.

But it’s not just the concept that makes Fame Town so nice: the gameplay itself is pretty entertaining and challenging enough to keep you playing. You start as a D-List celebrity, a wannabe movie star and you must work your way all the way up to the A-List. How do you do that? Well, by taking classes to improve your skills, by playing in sitcoms and other low budget movies and slowly making a name for yourself.

Basically an RPG with a small time element involved, Fame Town’s gameplay is mostly based on making movies and TV Shows: while the TV shows keep you going and offer you a steady but rather small steam of income, it’s the movies who really help you score the big bucks and gets lots of fans. However, making movies is a bit more difficult because you’ll always need some skills (that you usually don’t have so you have to learn by simply purchasing them from the market) and/or some props that can also be purchased from the market. Even more, you will have to wait a while for the movie to complete, as opposed to TV shows where you only need one energy to perform an action and grab some money. 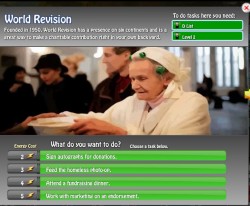 There are also a couple of minigames that keep things more interesting in Fame Town: first, it’s the minigame that comes with movie making where you have to click the stop button when an arrow is in the green area and second is a minigame (slots-like) that comes with the Events&Nightlife part of the game, where you basically use different amounts of energy to gain different things (fans, XP, money and so on).

The social part of Fame Town – a game that could’ve been actually created around interaction between neighbors – is really limited: friends can visit you to help increase the ratings of your movies, but that’s about it. Somehow, more has to be done in this area because the viral element of the game is completely missing – and that’s really sad, since Fame Town is not a bad game at all: there are tons of movies for you to make and tons of TV Shows to star in (all in different genres) and if it’s a movie star you’ve always dreamed of becoming, now is your chance!

So head over to Facebook and give Fame Town a try!