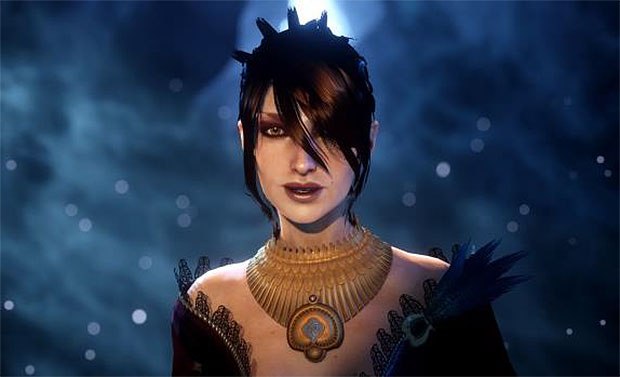 Morrigan was one of the main characters in Dragon Age Origins and she is known for being cold, apathetic and egocentric. She is a witch of the wilds just like her supposed mother, Flemeth, and she was raised far from civilization. Due to the lack of interaction and communication with other human beings, Morrigan is not able to fully empathize with most human-like actions and decisions. During Origins, Morrigan was many times the hero and the villain simultaneous, since she never offered anything without any sort of gain. Many things have happened since Morrigan was last seen in the Witch Hunt DLC and the question is: What kind of character will Morrigan be in Inquisition? Will she keep her old posture of seeking any form of profit through her actions? Or perhaps, she has changed and evolved into something else? In this article, I’ll be discussing what will probably happen with this character. 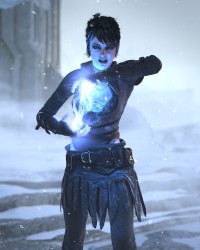 Part 1: Magic Has Always Been Part of Her Life

Living in the wilds might not be the best lifestyle ever but for a heretic mage it’s probably the safest way to live. Far from the templars, Morrigan could always find solace in the company of animals and of course, her magic abilities. Being a shapeshifter means you can transform into all kind of animals, thus getting closer to them becomes easier. But Morrigan is aware of the human world and she knows that if she ever gets caught she will most likely spend the rest of her life locked in one of The Circles. It’s natural for every mage to hate and despise templars and all the institutions commanded by them. Therefore, Morrigan cannot have any kind of sympathy for this faction, simply because it seeks nothing but to imprison and enslave mages, even those capable of containing their own powers. It would be extremely naïve to defend templars’ goals while being a mage, however things got completely out of control during Dragon Age 2 and the world of Thedas is now at war. And the war will have no ending, unless mages and templars reconsider their ideals, values and ethics towards each other…

None. Morrigan is a witch and witches are known for being strange, bizarre, awkward. She surely has evil inside of her but she also has a good side, just as everyone does. But Morrigan isn’t just anyone. She’s a very powerful sorceress with knowledge of ancient magic. She is more than capable to be god’s hand amongst the living and she proves that by conceiving a baby with a soul of the divine. Nevertheless, Morrigan has a bittersweet personality that makes her think twice before doing anything – if there’s nothing to gain, then it’s not worth it. She only joined the Warden’s journey because the blight was a real treat to everyone, even herself and her life; she only offered to save Warden’s life because she wanted a transcendent supernatural child. With every good action comes a price… but isn’t it like that in real life too? Morrigan’s behavior can be seen as evil and selfish, since she always wants something for herself but on the other hand, her offerings are beneficial so it’s also a good action. Nothing comes for free and I believe that the Morrigan we know will return exactly as she is.

Part 3: The Archedemon Child and Inquisition

BioWare has announced that Morrigan will return in Inquisition. Although, she won’t be a party member as it happened in Origins, she will have a great role in the upcoming narrative. It’s too early to speculate but it will surely be related to the unborn child she conceived at the end of Origins with Alistair or the male Warden, perhaps this youngster will be the key to resolve this massive conflict that is tearing apart the whole domain. But there will be a major problem; I can’t possibly imagine Morrigan cooperating with templars, even if they’ve become more comprehensive and tolerant towards mages, it seems unlikely of her. However, she will realize that if she doesn’t do anything, Thedas will collapse upon itself and the result will be basically the same compared to the destruction caused by another blight. I believe it will be in players’ hands to influence Morrigan regarding this matter, meaning that each player will end up with a different story just as it happened in Origins. Therefore, Morrigan can perfectly become the true hero and the grand villain once again.

I am certain that Morrigan will offer her abilities to the Inquisitor. What I don’t know, however, is what she’ll ask in return this time. She has been preparing something huge since long ago and the only thing we seem to know about it is that it involves that archedemon unborn child; everything else is sealed in pure mystery. I guess BioWare will be unveiling some more of the upcoming plot in the months to come. Until then, Morrigan can keep preparing her ultimate plan to completely destroy or save Thedas.