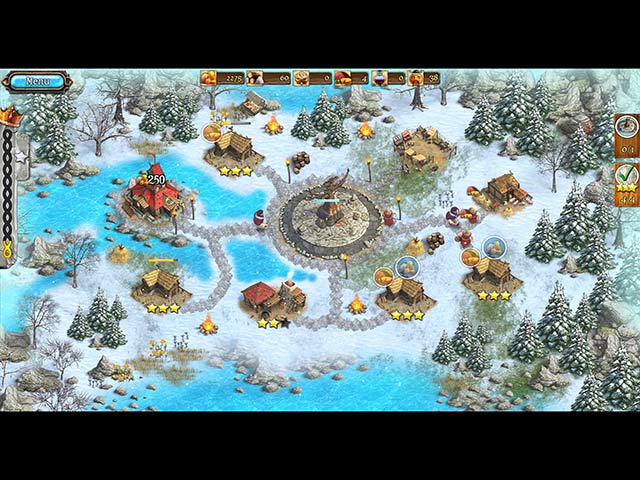 I am really happy to report the launch of a great new Time Management game over at Big Fish Games: Kingdom Tales 2. I have been a huge fan of the original title, and if you are in a similar situation, then you will surely have a lot of fun playing the sequel that brings us a better and bigger game, while still delivering elements that made the first title in the series so great.

A long time ago, there was a kingdom ruled by the fair king, Arnor. He had a most beautiful and clever daughter, princess Dala. Noble lords from many kingdoms begged the King for his daughter’s hand. But, no one was good enough for his Dala. However, in absolute secret, the young blacksmith Finn and Dala were in love. Until one day their secret love was revealed! King Arnor was furious!

Join the expedition of the king’s builders and architects on their noble quest! Explore, gather, produce, trade, build, repair and work for the wellbeing of all of your subjects! But watch out! Greedy count Ohli and his spies never sleep!

There are 40 levels for you to complete it Kingdom Tales 2 and you will surely have a ton of fun doing so. Even though the graphics are pretty much the same with the original (which means you’ll be on familiar grounds), you have three game modes to switch through and you can do so without losing progress. Apart from that, the challenge is there in every mission in the game, which gets more and more intense as you progress through the levels.

In other words, if you are a fan of time management games, this one is a title you’ll really love playing! So click here to head over to Big Fish Games and download Kingdom Tales 2!