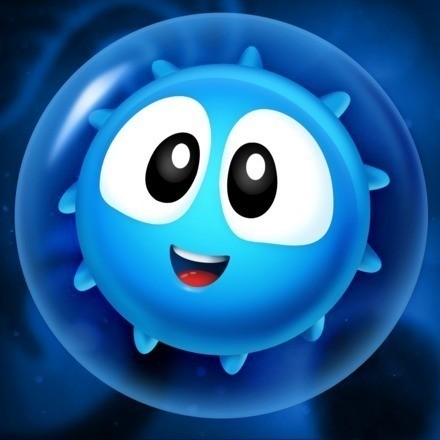 Cyto’s Puzzle Adventure, or just simply Cyto, is a puzzle game in which you control the titular Cyto on a journey to recover his lost memories and understand his past. Released a few weeks ago on iOS devices, Cyto charges players with navigating through a myriad of puzzling levels that require the player to have a basic understanding of trajectory as well as how to plan their actions in a strategic manner.

The goal of each level is to navigate Cyto from one surface to the next in order to reach the exit while avoiding obstacles and being careful not to fall to the bottom of the screen. This is done by using your finger to move Cyto in a position in which to fling him to the next adhesive surface in a similar fashion as Angry Birds. Along the way you will encounter small globules, which are pieces of Cyto’s memories, that you may collect to receive a higher score and to unlock more of Cyto’s past. 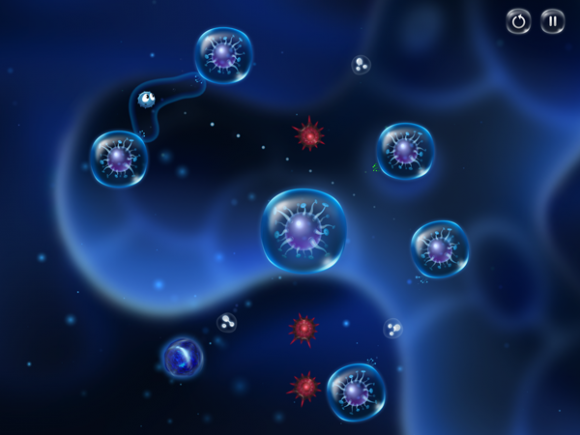 Flinging from surface to surface sounds easy enough, but things become much more complex as new mechanics and obstacles are added to the mix. Also, not every surface is adhesive; Cyto can only stick to areas that are covered in little blue hairs. From these points you can stretch Cyto outward to grab on to memory fragments or other adhesion points. You have the option of flinging Cyto when connected to a single surface, but you will travel much farther when you launch him from two points. Of course, you always have the option of letting go of a surface without flinging Cyto; you can disconnect at any time by simply tapping the surface you’re attached to. Unlike the regular blue adhesive hairs, green hairs do not give you the option of launching Cyto, rather, they allow him to stretch out much farther in order grab on to other surfaces; this can be used to quickly traverse the level and reach more optimal points of adhesion.

Cyto’s style and aesthetics can best be described as an artistic depiction of life on a microscopic level; the platforms in which Cyto adheres are cell-like in design and the backdrops give off a similar vibe. The game’s name and character are certainly derived from the gel-like substance cytoplasm that comprises the majority of a cell’s make-up. While the name and aesthetics may be inspired by cellular biology, they are both heavily stylized in a cutesy, cartoonish tone. This is probably my favorite aspect of Cyto’s Puzzle Adventure; it’s so darn cute! While playing, Cyto makes cute little inquisitive sounds and facial expressions that can coax a d’aww out of even the burliest of macho men. 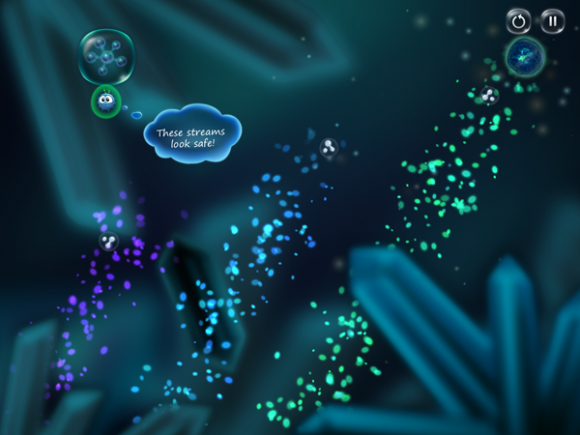 Unfortunately, the music of Cyto’s Puzzle Adventure is a little lacking. It’s not bad, in fact, it’s quite good. The problem is that there isn’t enough of it. There are four worlds in the game, each having on the order of 24 levels, with some of the later ones in a world taking a good amount of time to complete. However, each world only has a single music track, and while each is hauntingly beautiful and mesmerizingly atmospheric, they do get old after a while: which is a shame.

Overall, Cyto’s Puzzle Adventure is an excellent game to add to your iOS device. The game is clearly expertly designed because of how new mechanics and ideas are presented throughout the game rather than all at once. This keeps the game both fresh and fun while giving the player time to master new skills before being given a new one. So, if you’re getting sick of Angry Birds, give Cyto a try; and at $0.99, you can’t really go wrong.