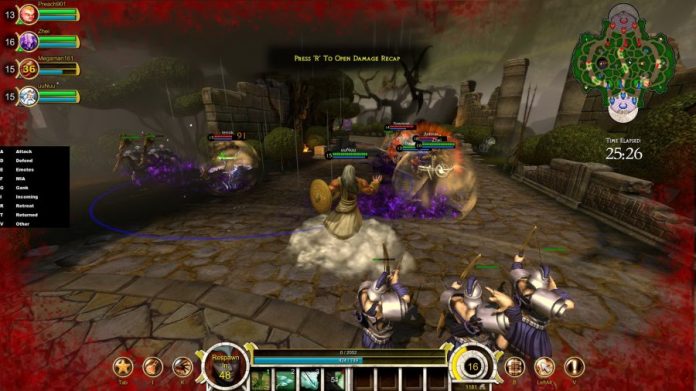 I’ve never been a big fan of MOBA styled games. I’ve tried my hand at League of Legends, DotA 2 and Heroes of Newerth, and never really been able to get into them. The truth is they seem incredibly inaccessible to new players. When I first began to play DotA 2 I was pretty much bullied out of the game by my team-mates for being, frankly, awful, and I was. LoL was a bit more forgiving, but due to the hero rotation I could never practice and excel with a single character. By the time I got the hang of one hero, they ripped it from me. By the time I got to HoN I realised that MOBA’s weren’t for me.
So why did I still try and play Smite?

Smite is, to all intents and purposes, exactly the same as DotA, or LoL, or HoN. (I use a lot of acronyms, I hope that’s OK).

For those of you who don’t know what a MOBA is, MOBA stands for Multiplayer Online Battle Arena. You pick a single hero, and join a team of five to kill the enemies five heroes. Maps are typically split into three lanes, each guarded by towers, and minions who walk down the lanes, giving you easy kills, or annoying the enemy. The objective of the game is to destroy these towers, advance down these lanes to the enemies base and destroy their monument. There is so much more to it than that, but for a basis that’ll do.

The thing that separates Smite from the others is the camera, and how the game is played. The first three are played top-down using just the mouse to move and attack, selecting special abilities with numbers on the keyboard. Much like an RTS game this style of control is very detached, you’re looking down on the action, but you’re not a part of it. Your avatar feels more like they are listening to orders, than reacting to your controls. Smite places the camera into third-person, and gives the player full control of the character using the WASD controls. The game feels more like a shooter, particularly with ranged and mage type characters, and a reticule to aim through. Physical characters still have this ability to aim, and can only select one character at a time to attack.

It’s this camera different that makes Smite entirely different from the other three. It places you, the player, on the floor, watching the battle unfold from the same perspective as your God. They’re called Gods in Smite, not heroes. Allowing you to control your player with the keyboard puts players on familiar ground, as though playing any other game.
I mentioned in my Destiny article how much better mouse-controlled games would be if they utilised the standard control system, rather than just the mouse in ‘click-to-kill’ fashion.

The other thing that separates Smite from the others, for me, are the Gods. Each game has their own separate Heroes, and they’re all awesome, but they could have any other name, or look any different and still be the same. Smite uses Gods from popular culture with recognisable names. Thor, Artemis, Anubis, Ra, Poseidon. And others you may not know like Xblanque and Ymir (but who are canonical in their own mythologies). Making characters people we are already familiar with makes playing them a lot more fun. We’re all familiar with Thor and it’s pretty awesome to see him swing his hammer into the inferior minions’ faces.

The games are more frantic, due to the keyboard controls, each encounter is more tense, but play it correctly and you can walk out better than before.

Then there are the other game modes. Rather than the typical three-lane system (which in Smite is called Conquest) there is Arena, a sort of deathmatch. Joust, which is 3v3 conquest, on a single lane. And Assault, five players using a single lane, but this mode picks the God for you. These different game styles mix up the formula, of an already shaken game, offering the player different ways to play, rather than just imitating the game-style of the other three.
Also is the graphics, the game looks pristine. Again, due to the camera, you’re in the map, surrounded by jungle, walls, towers and monuments, and the finish makes the game look great. Admittedly the graphics are arbitrary because, when you see the enemies, everything else takes a backseat.

Finally is how the game ends. Rather than destroy a monument inside the enemies base, there is a Titan. A sort of boss figure you have to defeat to win, which makes winning the game not only more difficult, but also much more exciting.

My only gripe with the game is the tutorials. As soon as the game boots up you are put into a tutorial. Even when you have completed that tutorial you still have to play through the practice levels to unlock Conquest. This wasn’t too big a problem for me, because I would have done the tutorials anyway. But for veterans who just want to play the traditional style of MOBA play, it might have turned them away.

Also that the learning curve is just as steep as any other MOBA, with each special ability fixed to a number, and a surprisingly complicated shop to scroll through, whilst your allies are still fighting.

Hi-Rez have taken a tried and trusted formula, shook it on its head, and bought us a game that feels familiar enough to be enjoyable, and different enough to possibly stand out against the other giants it has to go toe-to-toe with. I would definitely recommend you play it, especially if you’re a fan of the MOBA genre. The game can be found here: Smite.

Now, if you don’t mind me, I’m going to go play some more Smite.