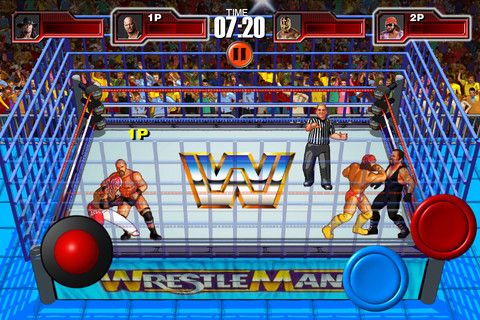 I don’t know about you, but I certainly remember spending rolls of quarters on the original WrestleFest. Fortunately, as technology advances, we now have to pay much smaller amounts of money for our gaming pleasure. And that pleasure should reach maximum heights today as WWE WrestleFest debuts on iOS systems and delivers some amazing gameplay.

The good news is that the classic wrestlers of the 90s, like Jake “The Snake” Roberts and “Macho Man” Randy Savage are not alone in this remake and today’s top wrestlers are added to the rooster. So expect to see John Cena and Randy Orton in the mix for even more fun.

In case you didn’t play the original WrestleFest, it’s all about wrestling: you choose a tag team with your favorite wrestlers then compete against others, round after round, trying to get the title. This time, though, there is multiplayer support and WrestleFest can be played on iPhones, iPads and iPod Touch.

The full version of the game is available in the App store for just $2.99 (a bargain if we are to consider how many rolls of quarters we would’ve spent otherwise!) but there is also a Lite version that’s free to play. Click here to get WrestleFest for your iOs operated device.