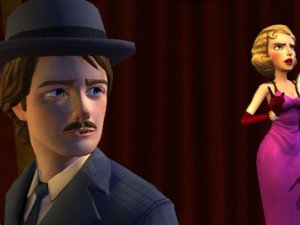 ****Nothing But Spoilers – Check the review of Episode One for the gameplay and overall review, this is focusing on the story. Continue to the next line of asterisks to see the non spoiler section***

After the first episode I could hardly wait to see where this story went in episode two. After having to traveling back to the future Marty realizes that not everything is what he would have thought. Biff now has two brothers and they have become the 5th largest gang family in California. Marty was apparently run out of town two years prior in an attempt to save his family from further abuse from the Tannen family. Doc shows up just in time to get them back to the past to fix the problem. Apparently their actions in episode one had prevented Kid Tannen from getting arrested which caused the family to prosper to the present day completely running Hill Valley uncontested.

Marty first has to figure out a way to save Artie McFly (Marty’s Grandfather) as he is to be killed and left on the courthouse steps. To do this however, he’ll have to dodge himself as he performs his actions from episode one. This is where the game got very interesting to me. One thing I had always thought would be difficult to pull off is the storyline of time travel and everything being affected. So far so good as the changes in the story from the original past immediately start making a bigger mess of things.

Marty eventually does save Artie but then the next plot point is unfolded as they have to figure out a way for Kid Tannen to be arrested. All the events from Episode One seem to take their toll in this area of the game. The cop that was supposed to arrest Tanner has now started working for him due to a demotion caused by a flying car and letting Carl Sagan (Doc’s characters name in the past) get away. On top of that the woman who is supposed to give the evidence to put Kid Tanner in jail won’t do it without Artie’s advice. However, since you served Artie the supoena in Episode One Kid Tanner wants him dead. It’s pretty clear that Marty has made a mess of things indeed.

Marty does a lot more in this episode than he did in the first one. He knocks out a few gangsters and burns down a building to name a few. You’ll watch, young Doc’s, inventions go horribly wrong and find Einstein stranded on the roof of the courthouse! This episode, as far as action goes, is much better and it helps move the story a long with ease. As you escape back to to the future at the end of this episode Doc realizes something terrible has gone wrong. He had mentioned earlier that this was the night he watched Frakenstein and it motivated him throughout life. He still keeps the movie stub in his pocket! As you are leaving in shows the young Doc approaching the movie with Edna, the reporter. Doc doesn’t think that will change much but as you watch her pull his younger self out of the line you realize that this may be a bigger problem than he had expected. Marty shoots back to the future and although he left the past with Doc and Einstein he is now only as the car flies right through the Hill Valley sign. Although this Hall Valley sign is a little bit different…

I was impressed with the first episode’s story and this episode picked right up where the other left off and did an amazing job continuing what it had started. However, at times the actual game gets a little boring, as all I want to do is see how the story unfolds. It truthfully makes me wish they would turn this game into a movie. Fun right? A movie about a game based off of a movie? Well, I guess it wouldn’t be the first time. Remember Street Fighter The Movie The Game? Probably not, and even if you do that’s the opposite of what I had just mentioned. For the record that game didn’t turn out that well. I am now rambling. Back to the topic. Oh yes! Back to the Future Episode Two does a wonderful job telling a story and honestly maybe that’s all I want from this game. I know there will never be a sequel in the form of a movie but this is almost the same thing and honestly it is almost perfect. The twists and turns the story takes with the added bonus of getting to be a part of the reason is a dream come true to a fan of the films. Telltale has done a magnificent job thus far in keeping true to the Back to the Future brand and I am more than happy to say that there are still three episodes remaining for me to play. This episode took me roughly two hours to beat so all in all I’m at about four and a half hours thus far.