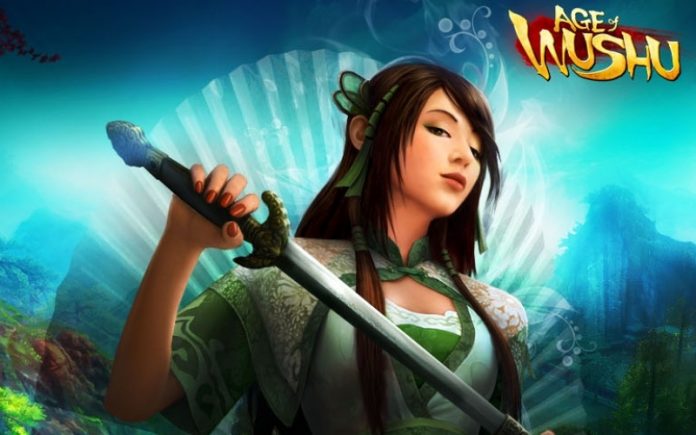 Age of Wushu (AoW) may resemble just another martial arts MMO but it’s not exactly as it appears to be.  The long forgotten Ming Dynasty of China has been brought to life through an extraordinary world filled with intense action and adventure. This oriental free-to-play game has been developed and published by Snail Games and the game’s story is based on ancient China, where Kung Fu ruled the land. Designated as an open world PvP MMORPG, Age of Wushu has a lot to offer when it comes to action – challenging other players anywhere, raiding caravan escorts and burning enemy guild bases are just a few examples of how immersive AoW can be. But if battling human opponents is a strong point in this MMO, questing, farming and exploring the realm are definitely not as exciting as you would hope.

The overall appearance of Age of Wushu is exceptionally stunning. The different graphical modes allow players to choose between detail and speed, however even the highest quality mode doesn’t seem to be extremely heavy (compared to other MMO’s such as Guild Wars 2 and TERA). Graphical features such as the volumetric lightning and ambient occlusion add a great level of realism to the game, even if some environmental areas are quite poor in detail.

The game attempts to recreate China in many aspects, everything in this world resembles Asia and its sensations. The martial arts dojos, the extended wood bridges over lakes, the blossom trees; everything has been carefully constructed to shape a fictional world where the occident has absolutely no place. The characters follow the exact same trend with typical Asian costumes, emblematic oriental hairstyles, traditional weapons and mythical Kung Fu moves. Climbing interminable walls and walking upon water is now a possibility; defying gravity is one of the main attractions of this MMO.

Leveling belongs to the past, in Age of Wushu there’s no real levels, there is a character that evolves with the game and it doesn’t exactly grow stronger by accomplishing quests and killing enemies, it becomes stronger by learning new techniques and moves through mediation. By other words, the game has a unique system based on cultivation points, which can be slowly placed on skills and traits.

Age of Wushu works based on administrative divisions, first of all there’s the main society of Jianghu, everyone is a citizen of Jianghu and as in every organized civilization there are rules to be followed. This giant sector serves mainly to control and contain abusive behaviors, for example if a player decides to become a serial killer, there’s a possibility to place a bounty on the criminal, jail him or even execute him. But to become a master of Kung Fu, players need to choose one of the eight existent schools (Beggar’s Sect; Emei; Royal Guards; Scholars; Shaolin; Tangmen; Wudang; Wanderer’s Valley), each one with its own unique technique and abilities. The third sector is the school orientation, which can be good, neutral or evil. This may seem fairly meaningless but in game it has a huge impact, as evil schools have no disciplinary punishment for being merciless and ruthless towards non-school players. As for the good schools, they are not allowed to do any bad things, included walking walked around the world! As it used to happen in the Ming Dynasty, those who don’t follow the rules are severely punished by the grandmasters and repenting is the only option to redeem yourself from the committed sins.

The battling system has a tight sense of realism as well; players can choose to parry and dodge enemy attacks and moving around the battlefield as fast as the wind is an option too. The fact that characters are able to dodge certain attacks and perform extraordinary hasty counter-attacks or retreats creates infinite battle strategies. The extended list of flies and jumps increases the immersion level of Wushu, as players get to do much more than simply run or ride a horse, they can blink, they can climb walls, jump on building’s roofs, slide on lakes without getting wet and on the top of all that they can still starve and drown. If we move to the profession sphere, things aren’t any different, most crafting jobs depend on each other, they’re linked and dependent. Besides, there’s basically no NPC shops in the game, players have to create their own gear, food, potions, enchantments and everything else in order to succeed in Age of Wushu. This factor doesn’t simply stimulate the in-game commerce, it encourages the trading between players too because people really need each other. Realism is a vibrant constant in this game just as in the real world, where people need each other in order to survive.

The wonders of an open world PvP game is that players can be attacked nearly everywhere. Age of Wushu isn’t a blood bath dressed in fancy clothes however, there are huge penalties for those who decide to mass murder everyone on their path, if they’re caught of course. But player killing (pking) is absolutely not the only way to engage exciting moments; action can be unlocked trough duels, arenas, guild wars, caravan ridings or even guild base assaults. The world is filled with action and it’s up to the player to decide its own role and path, good or evil, helpful or merciless, assassin or constable. The game fully supports both sides with endless rewards for both alignments.

As for simply PKing, the infamy levels increase very quickly, you can kill up to four players at a time or you’ll become red, dying with a red name means instant imprisonment. If someone bounties you and you die, you can’t escape prison as well. The system is a bit too harsh, thought it can be countered with in-game money for most cases as you have the chance to pay out.

Instances can be quite entertaining too, the system can be defined as old fashion, however it requires strategy and high cooperation between players.

Age of Wushu is an undoubtedly good surprise for the PvP world as it currently includes many battle options for battle seekers; on the other hand the PvE is very basic and crude. Quests are extremely tedious and easy to accomplish and instances don’t break the old mechanism of killing a thousand mobs for hours. There are several unexplained bugs and invisible walls around the entire world, especially on roofs – this can be extremely annoying for anyone trying to fight on the top of one. Nevertheless, this MMO brings many innovative features besides the peculiar battle system. The Wushu towns have its own charm as they’re always alive, when players log off, their characters are controlled by the servers, they become NPCs and walk around towns with specific jobs and they can be easily kidnapped by online players. Other features worth mentioning are the school positions, that be disputed every week through internal harsh battles, the guild territories, that can be stolen and occupied by enemy guilds and the regular weekly events, which challenges schools to accomplish certain tasks.

Social: A New Level of Interactivity

Each character has a profile called “My Jianghu”, an exclusive social feature that related the character’s story and progress and it contains all its connections, friends, close friends, enemies, blood enemies, followers and acquaintances. It’s some kind of mini Facebook in game, which can be quite interactive. Playing often with friends and close friends generates intimacy points. Becoming a fan of a determined player is possible in Age of Wushu as well.

Your behavior in game will affect other people in several ways, for example if you possess an evil orientation and party with evil players, you’ll start earning confidence.

Overview: It’s Good but It Could’ve Been Better

There’s no perfect MMO and in where most games excel, Age of Wushu fails miserably. However, it’s quite insignificant in this case because AoW isn’t supposed to be about PvE. The main focus is PvP and Snail Games has done a great work in this area. Adding to the several action modes, there’s a huge part that is not enabled yet, the battlefield area, which should include battlegrounds in the future. For a more challenging open world MMO, the PKing penalties shouldn’t be as harsh as they’re now; being a criminal may be very bothersome and complicated at times.

The GM activity seems fairly low, as the servers are filled with gold sellers that spam everyone continuously; another anomaly is the paid system that can disrupt the in-game commerce drastically.

Overall, the game is quite complete and entertaining and there’s always something to do regardless your orientation.