If an indie developer could earn the title of ‘most underrated,’ I think DrinkBox Studios would have it in a landslide. The reliability they’ve shown to make quality games is not evident in the praise they get, or don’t get. Guacamelee! is the studios third offering, and it maintains the token level of charm and polish.

Set to a beautiful ‘Dia de los muertos’ aesthetic, Guacamelee! drops you into the shoes of Juan, a farmer turned luchador super hero on a Super Mario like rescue mission. From the get-go, the world is stunning and filled with plenty of characters to give you side missions, beautiful backgrounds and tons of different homages. A keen eye will catch plenty of internet meme posters on the walls, Mega Man references and nods to other indie greats, such as Castle Crashers. And that’s before even diving into the dialogue. At points, it can feel like they are relying on these a bit too much, but it was never so much to detract from the experience.

The gameplay of Guacamelee! is largely MetroidVania, but it has a mix of a great brawler in there as well. Through the course of the game you acquire different moves, that act simultaneously as attacks and traversal methods. One being a large uppercut that can be employed as a double jump, because of the lack of a traditional one. They also help you, in genre fashion, unlock additional areas of the map, and solve some pretty tough traversal puzzles. The great part of these powers is they are all color coded to the areas they unlock and more. There are a few of these skills you will get, as well as a storefront to buy a couple extra attacks, along with extra health and stamina, which you can also acquire by getting collectibles. 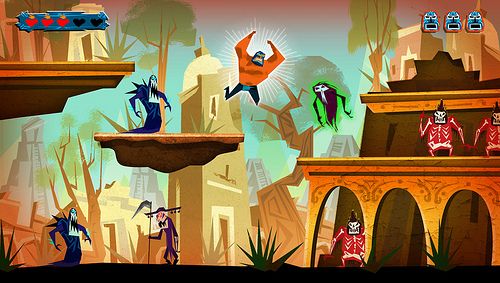 The touch controls on the Vita are a decent addition, but certainly not a requirement for this game. There’s a vertical swipe motion for one of the late-game mechanics, but everything else is accomplished with buttons. The combat is essentially one button plus a direction (with a grapple button and the powers button) but it never feels limited. Simple to semi-complex combos can be achieved, which makes it very satisfying when you beat an enemy with a single one. There’s only a handful of enemies to face in the game, but they are introduced at such a wonderful pace, it’s tough to complain. The game also does a great job of making those same enemies tough by throwing interesting combinations and giving them colored shield, which must be broken by that specific power before damage can be done. This makes the super simple combo system incredibly interesting and, in my opinion, unique. The entire game can be played in co-op, but I think the game shines in a solo playthrough.

The story of Guacamelee! can be beat in a single, dedicated sitting, but there seems to be enough incentive to return and play at least a second time through, especially if you’re a completionist. I think this is a testament to how the game can keep you glued to the screen. The game plays very fluidly and they throw enough new mechanics at you to make the MetroidVania genre feel fresh. Whether you’re playing on a Playstation 3 or a Vita, you’re in for an enjoyable indie gem, well worth the four out of five stars.