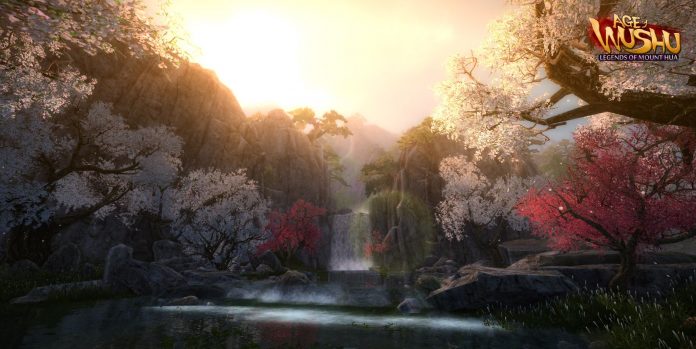 Legends of Mount Hua is the first expansion for the oriental MMO, Age of Wushu. The new content introduces several new mechanisms and features that intensify the potentials of this open world sandbox. The arrival of this expansion extended the current Age of Wushu experience, since the main three fields, PvE, PvP and social sphere, received notorious additions. Amongst a new dungeon to explore, new item slots to fill and new functionalities to engage, players can also compete between each other in order to qualify for the monthly Mount Hua Tornament. In general, the realm received substantial improvements, which conducts to a higher level of interactivity and creates complex relationship bounds between players and NPC’s.

Age of Wushu became even more dynamic and vigorous with Legends of Mount Hua. New players can now delight a more simplified and friendly beginning, as well as choosing a martial arts player to guide them through their Wushu experience. The Martial Brothers mentor system, allows elite players to assist novices; both players can unlock unique rewards by doing activities together. The relationship system between players and NPCs has been slightly changed, now players can send more gifts to their friendly NPCs in order to quickly increase their affinity. Whenever a NPC approves a player’s action, bound coins will be automatically awarded. The Revenge System can be accessed through certain mercenary NPCs. When players are killed, they can pay friendly NPC mercenaries to prejudice their enemies. In fact, death is not a requisite to trigger this function; all players need is unbound liang and a certain level of affinity with the NPC.

The Forbidden Instance list has now one more option, the Yangmen Pass. This dungeon is now the hardest to complete in game and it offers unique rewards, including skill sets, techniques and inner books. A new PvE solo system has been introduced as well, Exploring Jianghu, where players must face several factions alone. This system works by difficulty levels and each challenge has a rating, only the “A” rating will allow players to receive Jianghu experience and points to unlock certain boosts and special items. Exploring Jianghu is a revolutionary system that allows players to create their own environmental challenges without having to rely on a team or raid.

Combat & PvP: Only the Strongest Will Triumph

The combat mechanism didn’t receive any significant changes at a global level; nevertheless two new systems were added to Age of Wushu: The Invasion and The Hua Mountain Competition. The first is a giant battlefield map, where the Ming and Meng forces recruit players everyday to fight against each other. Besides having the chance to brutally challenge other human opponents, players will also earn invasion tokens that can be used to obtain unique skills. The Hua Mountain Competition is a global tournament that allows everyone in the server to quality into the final rounds of this event. The first qualification requires players to fight each other during several weeks; killing opposite orientation players will reward one Jianghu sword. There are other ways to obtain swords, such as winning school positions. The top thirty two players will then be randomly matched in duels, however only the best five will be able to unlock unique titles, costumes and relics. The one that proves himself the emperor of the server will hold an exclusive deadly sword with its own abilities for around two weeks.

The Battlefield system received several changes in an attempt to create a more fair system. Now, when one faction is losing dramatically, NPCs will automatically respond. The rewards for this activity have been changed; treasures and skills can be obtained with battlefield points.

Snail Games brought a huge list of new features into Age of Wushu, however there are several aspects of the game that remained untouched, for example certain basic skillsets need to be balanced in order to create a more equilibrated PvP system. Introducing an endless amount of new content doesn’t always stand for innovation; it rather means that the game has become larger and more complex. Nonetheless, there are a few progressions worth stating, the immediate instance entrance is one of them; players don’t need to walk half the world to reach a certain instance entrance anymore. Becoming an instance assassin has become easier too with the automatic application. A customization expansion allows players to modify the appearance of their current gear by obtaining Design scrolls.

One of the main innovations in this expansion is the gold/jade point mechanism. While jade points can be obtained by completing instances, factions or killing world bosses, the gold points are awarded through basic activities, like gathering, spying or running escorts. These points can be traded for all sorts of items, recipes, material boxes, skills or even basic gear.

The Treasure system introduced new item slots as well as a unique environmental mechanism, which allows players to fight enemy groups until the rage bar triggers the appearance of a mini boss, upon death a treasure or even inner skill scrolls will be inside a chest.

Finally, a second manufacture profession has been unlocked. In a game, where crafting holds such a meaningful role, this feature will surely stimulate the markets by increasing the amount of available manufacture items.

Legends of Mount Hua delivered a huge amount of new content, it basically felt like a new game inside an already existing game, but it’s not just about quantity, most of the new content has a notable quality as well. Snail Games contemplated action, social and environmental features and implemented fresh ideas in an efficient way. The broad new systems shaped new ambitions, motivations and goals, as a new exuberance escalated in the daily life of Wushu. The released content was quite balanced and both fields, PvE and PvP, became more competitive and interactive. One of the main markings of Age of Wushu has been the endless amount of activities in game and with Legends of Mount Hua this marking has growth exponentially since a new world of possibilities has born.