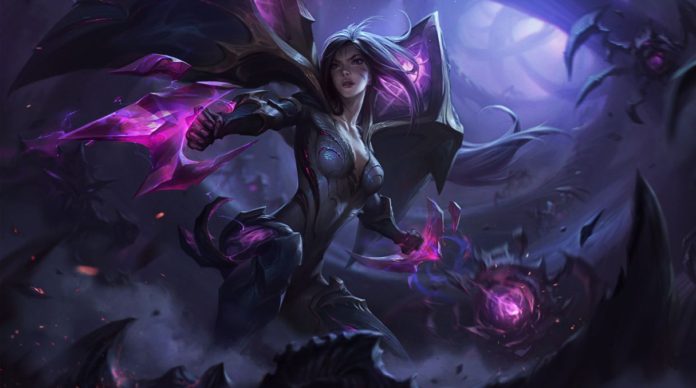 League of Legend’s patch 8.5, dropping tentatively on March 8, will bring back some items from the void of non-existence, as well as buff and nerfs to various champions, since balancing 100+ characters is hard.

But first, a new champion will emerge from the void.

Meet Kai’Sa, Daughter of the Void

Kai’Sa is a ranged physical attacker fit to be a carry. Her skills revolve around proccing Plasma, a unique debuff. Allies can add stacks of plasma by using skills with immobilizing effects. Plasma deals increasing bonus magic damage, and after a few attacks will rupture for a burst of damage. That burst damage will increase depending on the target’s missing health.

Icathain Rain, her (Q) skill, will fire six (6) homing missiles that target nearby enemies. Her (W) skill, Void Seeker, will release a player-directed Void blast that will reveal the first enemy it hits, as well as dealing magic damage and applying two stacks of Plasma. Supercharger, her (E) skill, charges her up, letting her gain bonus movement speed during charging and bonus attack speed after charging. Her last skill, Killer Instinct, makes her dash to a target location near an enemy champion affected by Plasma, in the process gaining a shield that lasts for 3 seconds.

Being bonded to a living void carapace, her suit adapts to how she attacks, evolving her skills based on stats gained through shop items and level. As an example, Icathian Rain will fire more missiles with enough bonus Attack Damage. Void Seeker, once the required bonus Ability Power is met, will deal more damage and reduce skill cooldown partially upon it hitting a champion. Lastly, Supercharger will grant true invisibility while charging up. That is if the player racks up enough Attack Speed.

Made to be versatile, the player can decide various strategies and Kai’Sa can adapt to those very easily. The only role she cannot play well is that of a tank. She’s an amazing attack damage carry and has potential to be a jungler as well.

A Returning Item and Other Changes in Items in Patch 8.5
The patch is bringing back Shurelya’s Reverie and tweaked the effects of Ancient Coin and Locket of the Iron Solari. While these items will work the same way they used to, their effects have been changed slightly.

Shurelya’s Reverie will now provide 40 AP, 200 health, and 10% CDR. It still has the unique active ability to give the user and nearby allies +40% movement speed for 3 seconds and was given the unique passive that grants the holder an 8% movement speed boost for this patch.

Ancient Coin still works the same way, except killing multiple minions and monsters will disable gold generation temporarily. The length of time increases the more kills are made but can be reset by going to the shop. Nomad’s Medallion is also affected by this. The Bandit passive has been removed from this LoL item (and Nomad’s Medallion and Remnant of the Ascended) as well.

Locket of the Iron Solari has its active ability replaced. It will now create a protective shield at your location for 8 seconds. The shield reduces damage by 35% and will apply to allies as well. Otherwise, it will work as before.

Champion Balancing
These champions will be buffed in some way:

Lastly, Tristana had some changes that weren’t outright buffs or nerfs.

Other Changes
There’s a new Precision keystone rune called Conqueror. It has the effect of granting your first attack against an enemy champion 10-60 AD based on level. This lasts for four seconds (and also starts four seconds into combat) and will convert 20% of the damage to true damage.

Then for Fleet Footwork, healing is now only 30% effective on minions. The patch will also bring in a new skin for Illaoi that costs 1350 RP, as well as some new emotes and other minor changes.

Look forward to the patch!