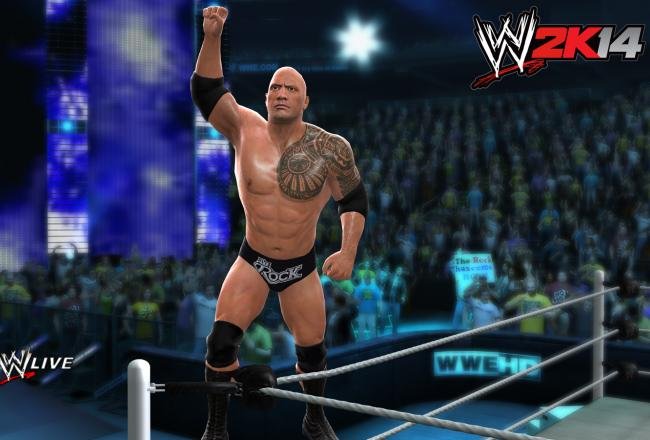 There’s an interesting critical debate buried within the casing of WWE 2K14, can a game redeem itself with having strong features and extra modes when its actual gameplay is completely rotten to the core, especially considering said features have been slowly tweaked and polished for nearly 15 years of releasing a similar product time and time again. It’s also sort of an argument against the concept of grading games with review scores, after all if you buy WWE 2K14 for the sake of messing around in its creation modes then you’re probably good to go, but if you actually want a strong videogame then it’s impossible to recommend on any level.

WWE 2K14 is actually fascinating in how inept its gameplay engine is. Some people try to defend it by claiming it’s a “simulation” game as opposed to a fighting game, but that’s a pretty weak excuse when what it’s supposed to be simulating is often fast paced, back and forth and weighed down in crowd and combat psychology. It’s pretty cynical to suggest that being a “simulation game” in any way condones being boring.

Taking out the magnifying glass on the actual fighting you can go on for hours about little things that show no-one was really putting any effort into the wrestling aspect. For example, when you perform a move that causes the opponent to bleed does the screen flash red at the beginning of the animation as opposed to when the move actually connects, that’s horrible visual language and gives the offence all the impact of a soggy maple leaf blowing into your face. Wrestling in WWE 2K14 is so limp that it is the only videogame I have played where it was genuinely impossible to tell when the game was just experiencing frame rate drops or was intentionally going into slow motion for “impact”.

The point is that the actual videogame part of WWE 2K14 is an afterthought, or at least we should certainly pray it is. Anyone with any instincts for videogame “feel” would know that the engine needs a lot of tweaks. But when the guys in charge demand a new game every year and you’ve got a bunch of new assets to create and have to insincerely make up some new selling points for this particular entry then a lot of the (very important) fine tuning is going to be lost. So rather than go into an over the top breakdown of every individual thing wrong with WWE 2K14 I’ll just recap two personal experiences that were so depressing they nearly caused me to give up on videogames entirely.

It’s worth mentioning that both of these experiences occurred during the “30 Years of Wrestlemania” mode, which is essentially a gauntlet of “must win in a certain way” simulations of old Wrestlemania matches. Some people complained that it was a cop out to replace the Road to Wrestlemania original storylines with such a feature but it was probably the best decision the team made. Did anyone actually play the story mode in WWE 12? The first chapter of it involved a stable called the “United Kingdom” with Sheamus in it, a guy from the Republic of Ireland. Word to the wise, people from Ireland don’t like people saying they’re in the UK. This pretty much sums up the amount of effort that was ever put into the writing of that mess.

This is a match from Wrestlemania 24 in 2008 for the uninitiated. The ultimate goal here is to win the match via pinfall using Randy Orton and his “Punt Kick” finisher. Biggest issue, the animation for the punt kick is ridiculously long and there’s no way to speed it up, you can beat both guys down for hours but it’s still going to be difficult to find that perfect moment where the planets align perfectly and you get enough of a window to hit the move and get the three count without it being broken up.

But that’s just bad design in terms of the team not considering how long it takes to build up enough momentum for a finisher and seeing how frustrating this would get quickly.  Still, playing through the handful of triple threat matches in the Wrestlemania mode was enough to demonstrate that the WWE 2K14 sort of implodes in on itself when it’s forced to render anything more convoluted than one on one action. Glitches double in quantity, reversing becomes unintelligible in a sea of stuff happening and basically anything you try to do is probably going to get interrupted by something. The targeting system sort of works when it wants to, and it doesn’t do weekends or Wednesday afternoons, so expect it to screw you over regularly. A common issue it has is refusing to chang targets after performing an offensive move, and assumes that you’re attempting to do a running grapple on the guy on the floor which is impossible.

This is the final moment in the 30 Years of Wrestlemania mode, so technically you could call this the game’s final boss, it’s certainly frustrating enough for the title. Here’s the deal, you wrestle the match normally until you have The Rock beaten with a finisher that the game magically forces him to kick out of. From this point onwards, you and The Rock have unlimited finishers and the game design has bumped up his testosterone so you can bet your birches he’s going to kick out of at least a couple of your finishers. Nothing else you did in the match matters, you could have been dominating for the entire time, the game forces you into this sudden death scenario.

Everything about this exposes WWE 2K14s too biggest flaws at their absolute worst. First off, how to perform finishers, you literally just walk up to the guy and tap triangle. Is this game made for toddlers or something? Who decided this should be so insultingly simple, there’s no weight or friction to it whatsoever, no strategy, no required conditions, walk up and tap triangle and they’re yours. The only way out is to reverse (or run away, but believe me that does not work in this scenario) and that’s a whole batch of problems in itself.

Here’s the thing, there is no skill involved in WWE 2K14 on any level except reversing. You can wear down any body parts you choose simply by pressing a button, there’s no set ups required for most moves now, so it is simply a case of reversing your opponent as quickly as possible and then delivering as much damage as possible. That would be fine if WWE 2K14 had a really solid reversal system but…well you know it doesn’t. It’s more of a case of learning the animations that actual “skill”, the timing on a lot of manoeuvres is really bizarre, and there’s an extra problem in the single player modes of the enemy A.I. being a bit slow in the head and standing around a lot, so knowing when to reverse a definitely ab-so-lute-ly-for-sure incoming finisher is little more than a guessing game.

Why didn’t they just rip off the WWE All Stars reversal system? That game had a great system that introduced true chain grappling into the gameplay (even if it was really stupid chain grappling). The WWE 2K14 reversal system is so bland that is it theoretically possible to stand there and win a match with pretty timed reversal grapples, since many reversals can’t be reversed it’s basically an unpunishable move.  Some of the new animations they’ve added are quite nice, when you reverse something running towards you and send them flying over the top rope that’s pretty sweet, but for the most part it’s all just part of the routine.

WWE 2K14 is not a videogame at all, it’s an interactive simulation of bashing action figures together to make them fight. It is a weightless little experience and one that made me seriously question if I’ve ever had less fun playing on my Playstation 3 before. For all its faults, WWE All Stars was inarguably a gosh darn videogame, WWE 2K14 is a piece of merchandise that lets wrestling fans tinker around with computer models of what they see on television. That’s fine probably,  but let’s not forget that there have been some genuinely great wrestling videogames, and let’s not group this franchised rubbish in with them.