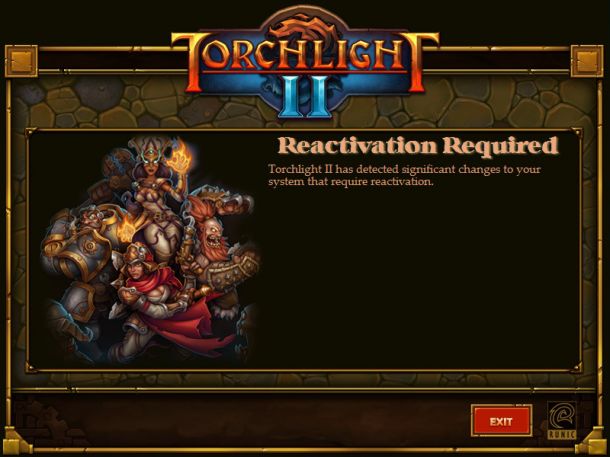 A flood of complaints from Torchlight 2 owners has flooded the Runic forums over an activation problem: the Torchlight 2 “Reactivation Required” error appears after updating your system, but there doesn’t seem to be a way to actually reactivate the game from anywhere, even though Torchlight 2 allows unlimited activations once you have purchased the game.

Apparently, this problem is caused by a Windows 8 update (who would install Windows 8 anyway?) that breaks the game. According to PC Gamer, Runic’s founder Travis Baldree said:

“In this case they appear not to be working – our current suspicion is that something structural has changed in Windows 8 (or during the upgrade process) which fundamentally breaks the license. Windows 8 seems to be the common denominator between the tickets that we’ve received. We HAVE tested the game and the unlocks on Windows 8, both before and after release – including license resets – and it isn’t a universal problem, which makes it more difficult to isolate.”

However, it’s not all lost. If you have such a problem with the Torchlight 2 reactivation, you should contact the Runic support service with a receipt from the purchase and information about your OS and setup and they will help you fix the problem, most likely by sending you a new key.