The most surprising revelation on E3 this year was probably the upcoming Ubisoft’s hybrid title Tom Clancy’s The Division. Instead of zombies, the apocalyptic scenario here will become more coherent and realistic, a deadly fabricated virus will infect the world’s population and chaos will overcome order in simply five days. That’s when the Division comes into action; this classified unit of self-supported agents must ensure the continuity of humankind and organized societies, or what’s left of it. The first indicator is set; an inventive storyline is always the beginning for the development of a great game, even more when it’s based on Tom Clansy’s theories. What’s truly intriguing, however, is the combination of different gaming genres that for the first time seems to be reaching the next-generation level of hybrid games. Creating a massive multiplayer online game, where action and role playing play two significant roles is something extremely challenging and tough to accomplish, proof of this statement is the fact that nearly every attempt resulted in a quite weak product, or one of the genres ultimately became submissive and secondary, while the other became the dominant genre. Tom Clancy’s The Division was presented as an innovation and a step forward in the gaming culture, it will not only be an exclusive next-generation title, as it will most likely become an hybrid masterwork, where players will have the opportunity to fully experience the breathtaking action of a FPS and the enthusiastic embodiment of a RPG. In an open world where danger can come from anywhere, strategy, tactics and decisions will affect the environment around, meaning if players prefer to adopt an evil behavior like killing everyone including citizens, chaos will smile upon New York. On the other hand, if players decide to fight for what’s just and fair, order will be able to be restored slowly and gradually. 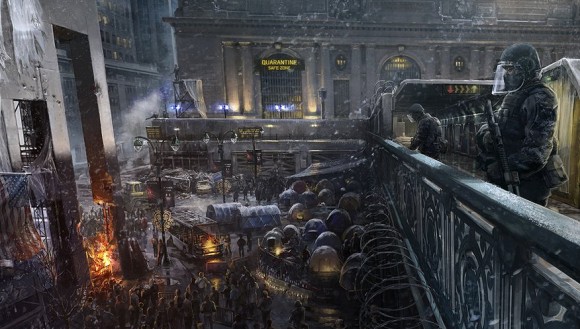 Ubisoft clarified that Tom Clancy’s The Division will have a very strong social component, where players can connect and interact with each other easily, a required structure to face the upcoming challenges – society is still going on and as so everyone needs each other to stay alive. Another remarkable feature is the mobile application that will connect players through smart phones and tablets, an intelligent choice from Ubisoft, since the mobile gaming world is expanding dramatically fast. It’s a visionary prediction, by the end of 2014 tablets will most likely have an even stronger impact than now and games that do not cover or support this portable device, will be set aside.

This upcoming action role-playing game won’t be coming out until Q4 of 2014 and as so, theories and opinions will remain as such for the remaining time, however Tom Clancy’s The Division has a great potential to become one of the many upcoming revolutions of the next-gen gaming.