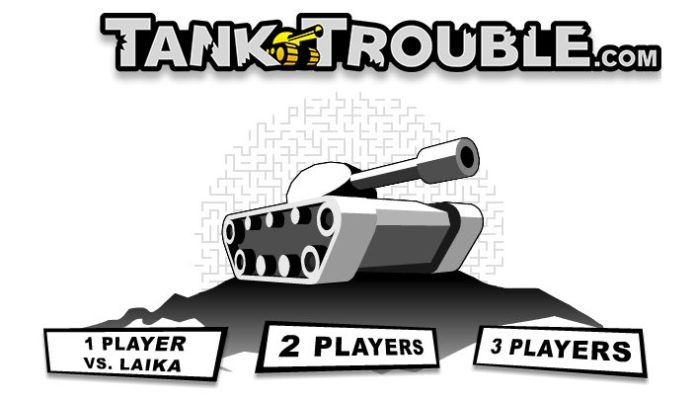 Tank Trouble was ten years ahead of its time. Now a decade old, the online battle game is still one of the most popular. The concept is akin to Bomberman—gamers traverse a maze while trying to destroy each other. This game has continually improved during its long run in the limelight, and it’s currently better than ever.

The single-player mode in Tank Trouble warrants full marks. Solo gamers will face a competent AI opponent in the form of Laika. The Cold War era’s most famous furry cosmonaut is a devilish tank commander. She will hound you at every corner, navigating each maze with ease and blasting bombs your way. The AI skill level cannot be changed, so you’ll have to practice and improve to win. Perhaps the most common newbie mistake is firing too many missiles at once. Blowing up your own tank is far too easy. Learn how to shield yourself, and you’ll succeed much more often. 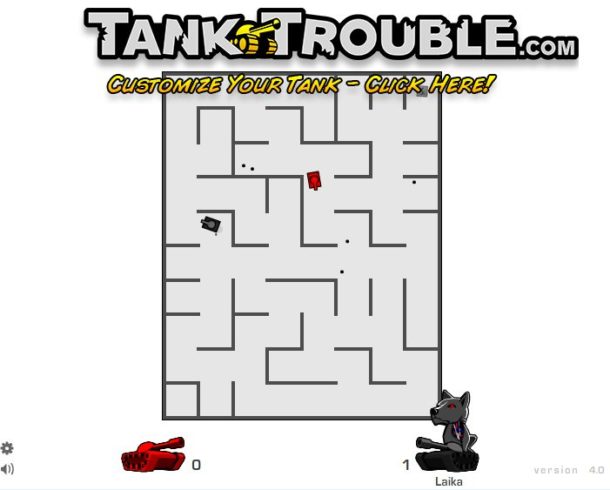 Tank Trouble’s two multiplayer modes are designed for playing on one device. When going head-to-head with a friend, you will share the keyboard. One player users the same controls as solo mode (arrow keys to move, M to shoot), and the other uses ESDF to move and Q to shoot. The latter control scheme might seem odd at first (i.e. Why not use WASD?). However, each control scheme is designed for right-hand steering and left-hand firing. Using ESDF for movement is more comfortable than squeezing both hands next to each other.

In three-player action, one person uses the mouse. This can be a big advantage, because turning the tank via the mouse is very easy. Also, the mouse-controlled tank has always-visible crosshairs. When battling with two other people, the least experienced one should use the mouse to level the playing field.

The Tank Trouble arena is loaded with bonus weapons. The laser allows you to see exactly where your ricocheting beam will land. The Gatling gun and death ray facilitate imminent death. Other weapons introduce new elements into gameplay. For instance, the RC missile is a truly remote-controlled weapon. After firing it, you can direct the missile’s entire flight path. While the missile is in flight, you won’t be able to move your tank. So, only fire the RC missile when you are in a safe zone. Another extra-dangerous weapon is the homing missile. After being launched, it will seek and destroy the nearest tank. Beware that you could get in the crossfire.

Tank Trouble has regular, “homemade”, and user-created mazes. When playing, the difference between these three types isn’t apparent. However, there is a seemingly endless array of mazes. Some are big, with many pathways and traps. Vast mazes work very well in three-player mode. Other mazes are quite small, which forces competitors to constantly encounter each other and battle. There is no way to choose the size of your next maze. Instead, just try to be prepared for any type of arena, and blast away.