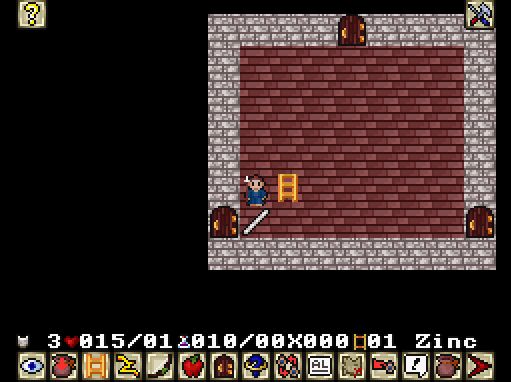 Many gamers remember with nostalgia the rage that the old roguelike games could induce. From the genre starter, “Rogue” to the more recent, funny “Dungeons of Dreadmor”, these games have infuriated gamers and provided joy at the same time. For those unaware, roguelikes tend to have several key features. The primary feature that sets roguelikes apart is that your death is permanent. This means that you cannot restore a saved game, and indeed, many roguelikes tend to delete your saved game after it’s been loaded. They also feature randomly generated maps, items, and enemies. This essentially ensures the game has replay value, since no two adventures will be quite the same. Unlike many games, they also don’t have a deep plot, being more based in hack and slash, meaning that it’s all about killing the monsters in the maps. The actions are also up to you: The genre isn’t reflex-oriented, like in first person shooters, nor is it strategy oriented like in real-time strategy games. In this review, we’ll be taking a look at a roguelike released in 2003, called “Powder”.

Powder is a game that has a simple enough story. As the official site says, you are an adventurer who is attempting to descend into the depths of the dungeon. Once there, you plan to slay the foul daemon known as “He who the author cannot spell consistently”, also known as Baezl’bub. Once you have slain him (or he has died via any other means), you intend to cut out his black heart and bring it back to the surface.

Though the game’s story and controls are quite simple, beating it can be anything but. You start off as a lowly level one adventurer, and, upon leveling, you can choose what god to worship (or even forgo worshipping any of the gods). Each god likes actions and hates other actions. For example, the fighter god loves melee combat, but despises those who utilize magic. The mage god loves those who use magic, but hates melee combat. The barbarian god loves those who use melee, but despises ranged. As a result, as you progress through the dungeon, you’re almost guaranteed to tick off at least one of the gods. If they hate you enough, they can do a variety of things to you, such as poisoning you, turning you into a mouse, or even setting you on fire. If you are worshipping a god, and are in his good favor, however, he can choose to bestow blessings upon you. From enchanting your items to giving you a holy +3 item to healing your wounds when you are about to die, the benefits can, quite literally, save your skin as you progress.

Overall, the game is a decent roguelike , and offers plenty of challenge. You can’t actually completely clear a floor, as enemies will just continue to spawn, and they actually level right along with you (in most cases, that is. Sometimes you’ll come across a weaker enemy or even open a door to be ambushed by several dragons or liches when you’re only level one).  If you enjoy crawling through dungeons and slicing up everything in your path, you should enjoy this game. Happy gaming!