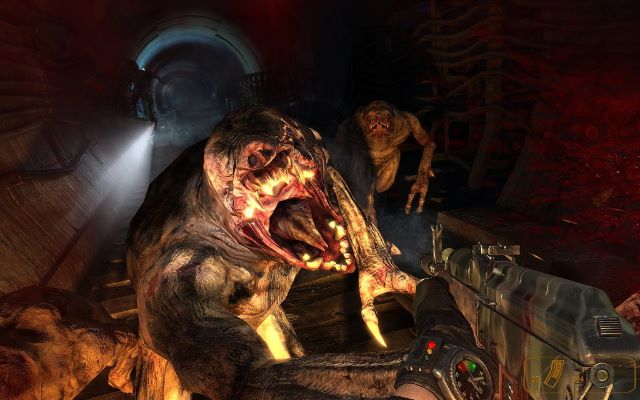 I recently decided that my 5 year old monitor could do with an upgrade and then I had to ask myself a question, do I want 3D or 2560×1440 native resolution ?. Ideally it would be nice to have had both on one monitor, but since nothing like that is currently available I went for the 3D option after hearing many good things about PC 3D gaming and overall I haven’t been disappointed so I thought I’d share some of my findings with you over the last few months.

Another thing that swung me that way is that PC gaming is my weapon of choice so I do have a fairly high end machine which is very important with 3D due to the very harsh performance hit that you get from enabling it. Of course 3D is not the only benefit that you get from a 3D monitor as these monitors are also 120Hz which means you can run games at up to 120 frames per second without any screen tearing if your machine can run games that fast of course. While doing some research into 3D gaming I saw a post from somebody saying that the jump from 60 to 120 frames per second is just as noticeable as the jump from 30 to 60 frames per second and I thought to myself that there is no way that can be the case, but it really is. Playing games at 120Hz is incredibly smooth, my modded version of Skyrim felt like a new game, when out in the open environments and I could pan around on quickly and smoothly that I had lower my mouse sensitivity right down. First person shooters also feel incredibly good to play to that speed, fast moving games like Left For Dead and Battlefield 3 play pin sharp and when used with a good mouse I would think that a monitor like this would even give you an advantage against other players if you play these type of games competitively online. Some games I found to be hard locked to 60 frames per second like Arkham City and Black Ops (locked at 80), but I did eventually find tweaks to unlock those as well.

Having an Nvidia graphics card in my system I obviously bought the Nvidia 3D vision kit with glasses and IR emitter. The newer 2.0 version also supports a technology called lightboost which automatically brightens your monitor screen as using 3D and wearing the glasses can make many games look quite dark, but even with lighboost I did find that most games I was still adjusting the brightness up a little to compensate for the darkness effect. Your monitor also needs to support lighboost for the technology to work. Its very easy to setup, the IR emitter plugs into a usb socket on your machine and Nvidia always packages the 3D drivers with normal video card drivers so your pretty much good to go as soon as your pluged in.

I’ll go through a few of the down sides and things that you need to consider first as its not all sweetness and lightboost. Performance…..ouch!, most games will pretty much have there frame rate halved with 3D enabled, some games slightly worse and some much better. My 580 GTX ran Arkham City beautifully smooth at 60 fps,1080p resolution with 3D enabled, but Crysis 2 and Battlefield 3 where in the 20’s and 30’s for most of my play time. This is where a good SLI system would come into is own, with a lot of gpu power you could have your cake and eat it with 3D and 60 fps game play, but you’ll need a big wallet to go down that route. So the power of your machine is certainly one thing to consider. I was looking forward to playing Skyrim in 3D as it was rated as excellent in Nvidia’s 3D rating guide, but was a bit disappointed to find that there was a shadow bug that made pretty much all the shadows in the game very distracting and look out of place. I did find a fix for this, but it just removed all shadows in the game completely which was not really ideal. Many of the games I’ve tried do have a problem with shadows in one way or another, Mafia 2 looks great, but has a massive performance hit with high quality shadows enabled as did Diablo 3 and Borderlands. So compromises in overall visual quality on many games have to be made. Another game I wanted to try was the love or hate Call of Duty Black Ops. This is rated as a Nvidia 3D vision ready game which means the game has been made and optimized for 3D right from the start and to give it its due it really did look fantastic however the always horrible field of view on the PC version caused a problem with the gun looking ridiculously long on the screen and the game performance was extremely spiky with 60 fps one second and then low teens the next !, but I guess Black Ops was always a pretty buggy game at best and I think another one crawled its way into the 3D code somehow. So the Nvidia driver ratings are not always to be trusted, but the Nvidia 3D forum has some excellent information and advice about how to get the best out of many games if your having problems. Many people have complained about getting headaches and eyestrain while using this technology, but I had no such problems with any games over reasonably long gaming sessions.

So that’s just a few down sides I’ve noticed since jumping into the 3D gaming world, some I was fully aware of right from the start and some that I wasn’t. On a more positive note I’ve all ready mentioned 120Hz earlier and even if you have no interest in 3D to play games at that sort of speed and smoothness is a joy to behold. I’ve seen a few films in 3D over the last few years and been pretty underwhelmed by them, but things are much better when it comes to playing games. The level of immersion that I’ve got from certain games with this technology has been fantastic and it becomes hard to go back to 2D at times. Both the Batman games Arkham City, Arkham Asylum are superb and are very well optimized. Tomb Raider Underworld, LA Noire, Left for Dead, The Darkness 2, Fallout 3, Mafia 2 and Borderlands all deserve a mention and are worth looking at if your considering the jump to 3D, but I’m saving the best for last here because by far the best two titles I’ve played in 3D are Metro 2033 and Trine 2.

I will admit that I did drop the visual quality of Metro 2033 to direct x9 to get a steady 60fps, but the game is just so immersive that you don’t even notice any loss of visual quality and lets be honest Metro 2033 is still a pretty sweet looking game even in dx9.. Dust particles float around in front of your face, your whole screen starts to mist over as you run out of air in your gas mask and you feel yourself lurching back from the screen as tunnel rats jump towards you. It’s a mind blowing and pretty scary experience to play this game in 3D, but one you must try.

Trine 2 is just a thing of beauty to behold. They say about some games that its the best film you will ever play well Trine 2 is the best Disney film in 3D you will ever play. The game itself is a pretty simple one, a side scrolling platform game with a few puzzles to solve and you can switch between 3 different characters at any time.during the game. The game just feels alive when you play it as if the the characters could just walk out of your screen and start talking to you. Even in normal 2D the game looks fantastic and always seems to be on Steam at a bargain price so well worth picking up if you see it.

3D is definitely worth considering if your looking to buy a new monitor and the bonus of 120Hz is really excellent, but you do need a powerful rig for 1080p gaming and many games are not optimized or have problems with shadow and lighting effects. The games to look out for are the vision ready titles which listed at www.nvidia.com/object/3d-vision-games. Vision ready releases don’t tend to happen very often, but I do believe that Borderlands 2 will be vision ready so I’ll be looking forward to that one.