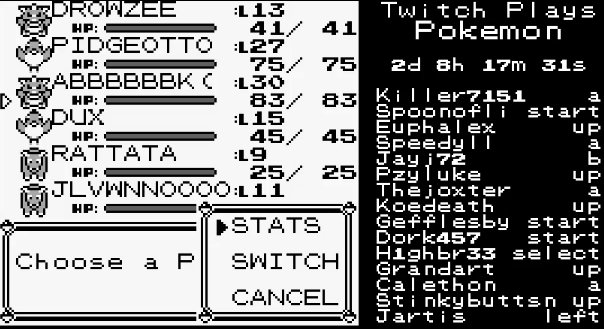 Don’t get too excited it’s not what you think. Get ready for one of the most bizarre MMOs ever created.

Users can log onto the site and enter into a rotating queue of players and enter a single command to Twitch’s modified version of Pokémon Red/Blue. It results in the creation of almost unobservable, spastic game-play in what seems like a first-generation Gameboy character’s personal quest to make slow progress tracing an ever widening circle and while players engage in random bouts mashing of the A & B buttons.

A timer tracking the duration of the game’s run ticks along next to a steam reporting which player made what move.

While the novelty wears off faster than the game’s repel spray, the dedication of the many players has actually resulted in two gym badges in as many days.

While it is unlikely that the collective will ever catch ‘em all, if Twitch keeps the game going it may inevitably result in completion, though even the most optimistic estimates have to put that weeks away.