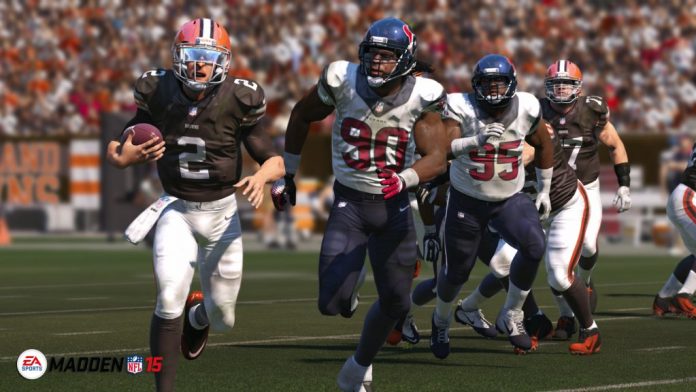 Madden 15 will be one of the best-selling titles on any given console this year, and the Madden series will continue doing so for the foreseeable future.

That simple fact alone is enough to make the more passionate of us shake their fist angrily at the public at large, and it is not because a sports game is incredibly popular because of course it will be. Most of the ire is directed towards the common notion that virtually nothing changes from one release to the next in the Madden series: played up with as much melodrama as possible as to incite more outrage.

Of course to suggest a series like Madden doesn’t change at all is disengenuous and downright ignorant, EA Sports is always prepared to offer a list of tweaks and additions to their game. The issue with these tweaks and additions is occassionally they make the game at large worse overall, the changes given also not being enough to justify what we typically describe as a sequel. What appears obviously, and causes the blood of Madden haters to boil is how EA Sports really doesn’t need to change a thing in their game at all, most of them ending up superfluous in order for their flagship title to sell boatloads. This not only goes for Madden, but their other massive chart topper in Fifa.

What we constantly fail to do is recognize the power of roster updates and having the backing of the professional license, an important factor in any game and why I personally believe mobile games aren’t as massive of a threat as contemporaries would like to suggest is immersion. Being able to blanket yourself in an experience will suck the player in, which simply isn’t possible through fictional rosters and fake teams, 2K tried it years ago with All-Pro Football 2K8 but ended up getting destroyed by Madden despite being a competent title. So much of the sports game experience is the emotional connection to a real-life sports team that we tend to overlook when observing why Madden is a sensation year in and year out, and why EA’s insidious move to get exclusivity of the NFL license turned out to be such a smart idea. Before most even thought it possible, EA realized the power of real life counterparts that the player can interact with and decided to make sure no one else has the privilege to make a competing game with said players. What results in an almost comically evil situation, but a very smart solution to competition which immediately gave EA a monopoly on football games.

Most everyone doesn’t want to go through the hassle of creating real-life players by the hundreds in downloadable rosters for each year mimicking a new release so you don’t have to. Though such methods is what keeps widely regarded sport classics like MVP Baseball 2005 relevant in this day and age on the PC. EA doesn’t release their sport titles on the PC anymore, and a common theme is for them to shut down the servers after one full year of the game’s lifetime in order to entice players to move onto the new title. The one giant reason for Madden being continually popular regardless of changes to the formula is the much derided roster update, and as much as EA Sports would like to point out just how amazing their grass looks and not comical and terrible the physics are it really doesn’t matter. As long as the players are given new ratings and uniforms that’s what matters, it becomes a topic of discussion within the player community. Why certain players were given one rating and the reasons they’re overrated, or how using one team that’s so much better than others makes you awful even though it changes year after year. These slightly fluctuating numbers is what keeps us flocking to each release, and while EA Sports continues their very methodical approach to shutting down old games and releasing new ones Madden will continue being the best-selling game on each console for years to come.