I have played tons of Facebook games and I still am a fan of many, but today I have experienced what certainly is the BEST strategy game available on Facebook right now, if not the BEST.FACEBOOK.GAME.EVER! I am talking about King’s Bounty: Legions, the Facebook port of the popular strategy/RPG series that has surprised and turned into addicts so many gamers.

Don’t say “no” to King’s Bounty: Legions if you are a hardcore gamer just because you see that it’s available on Facebook. It has nothing to do with Facebook games (like FarmVille, CityVille and so on) and that might actually hurt it a lot, since it has a huge potential, it’s a game of amazing complexity and definitely challenging for the most demanding gamers out there.

If you have played the great tactical RPG’s from Nival in the King’s Bounty series on PC, you will be on very familiar grounds: all of the creatures have been taken from the PC game and introduced to the Facebook version and from what I’ve seen from early testing, they all have the same abilities and stats.

If you haven’t played the PC version, let me tell you a few worlds about King’s Bounty: Legions. It’s an strategy game with huge tactical elements – like nothing you’ve EVER seen on Facebook – which puts you in the shoes of a hero roaming the lands of a fantasy world trying to help the people around by fighting their battles. You will raise armies, you will battle tons of enemies and move your way up to become a true legend. 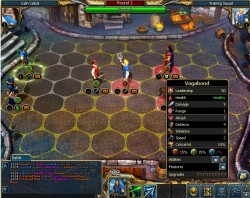 The game uses a stamina system that allows you to both travel on the map from one region to another and also fight battles. In the battles themselves, you won’t need any stamina, which means that once a fight has started, you’re staying there until it’s finished: a really nice touch that keeps you playing, not waiting for some energy refill. Also, you can play PvP battles and King’s Bounty: Legions has a match making system that automatically selects from the list of online players some that best match your skills. So you should always take part in evenly-balanced battles, which removes the frustration levels completely.

If you are a sucker for eye candy, that’s exactly what you will get from King’s Bounty: Legions. Almost all of the visuals are taken from the PC game, so you can imagine just how high their quality is. Again, with the risk of seeming too excited about this game, I can say that King’s Bounty: Legions is the best looking game on Facebook too!

Now, if you remember well, I was talking about the game’s complexity which is on really high standards here. I wasn’t joking: there are three races (Kingdom, Chaos and Beasts) that you can choose army from and each of these races has more troop types to choose from. For example, there are 13 Kingdom troops, each with various skills: Peasants, Archers, Mages and so on. But you can’t fill your army with as many as possible: there is a leadership level that your hero has which limits the number of troops you can carry. More powerful troops require more leadership, but sometimes you might feel better with a huge army of peasants instead of having just a few griffins (although this should never be true) – it’s all about playing style.

Even more, most of these troops have special moves that can be used in battles and should be used at the right moment in order to become victorious. Add to that magic, special items and you’ll really get a true hardcore game in King’s Bounty: Legions.

So… should a granny that loves to keep her FarmVille crops in shape and send gifts to neighbors play King’s Bounty: Legions? Probably not because this is a really complex, hardcore game. However, never say never: ever since I’ve shown HOMM III to my mother, she is an addict of tactical RPG’s (and she will also love King’s Bounty: Legions!) so you should at least give it a try.

However, if you are a hardcore gamer and you are especially fond of RPGs and more hardcore stuff, you should definitely try King’s Bounty: Legions. It has just so much to offer and it’s only in beta right now!

Click here to experience the amazing King’s Bounty: Legions and let us know what you think about it!