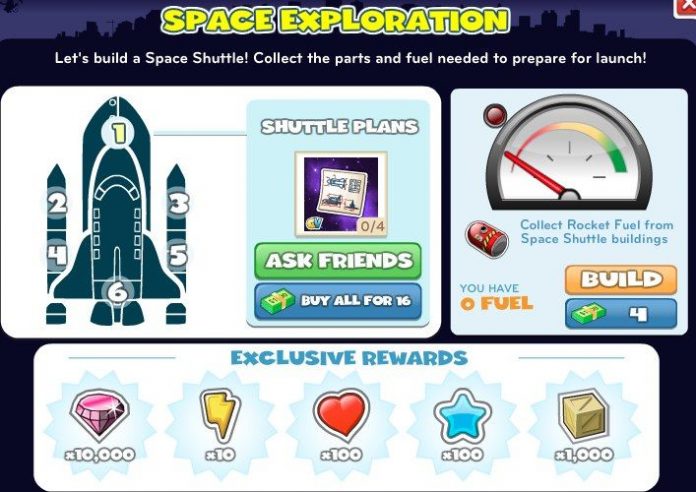 Zynga is now challenging us to boldly go where no other CityVille player has gone before: into space. And for that, they have readied for us the Space Invaders mission that acts as a intro for a more important feature, the building of our own Space Shuttle in CityVille! And this opens up a ton of exciting possibilities to the game, including the idea of having our own little city somewhere on a far, far away planet.

But until we get to colonizing other planets in CityVille, let’s see how to complete the Space Shuttle and the new mission in the game. We’ll start with the requirements for the Space Invaders mission:

The main goal here is to complete the Space Station (the Space Shuttle, that is) and you can see in the image in the upper left corner that there are 6 stages that we have to complete, and it won’t be a walk in the park. In order to build the Space Shuttle we’ll only need to collect Shuttle Plans from our friends, and we start with just 4 required for building the tip of the spaceship.

We will also need to collect fuel for the Space Shuttle and we’ll do so by building and collecting from the new Space themed buildings, which you will find in a new tab in the store.

And now… let the space exploration begin in CityVille! I am excited!