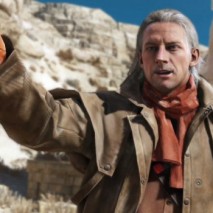 Metal Gear Solid creator Hideo Kojima took to twitter to explain which versions of Metal Gear Solid V: Ground Zeroes should people purchase. The 360 or PS3 iterations? Or the next-gen versions (Xbox One/PS4) of the game?

“I’ve been asked which ver u should buy. The feel of play & impression’s similar as it’s been made multiplatform/multigen this time. Sense of realism & graphics looks much better in next gen. So I’d say current-gen for those who can’t buy next gen just yet & upgrade later.”

“FYI, the world ranking of mission result/trial grade in GZ differs to each platform. The feel of play/difficulty levels are the same as we consider slight difference parts found in each hardware, controls or frame rate.”

Metal Gear Solid V: Ground Zeroes is a prologue to Metal Gear Solid V: The Phantom Pain, and is planned to launch on March 18, 2014. Consumers can download or purchase the game for $30 for the Xbox One and PS4 versions. The game will also cost $20 if downloaded on the Xbxo 360 and/or PS3, or can be bought retail for $30 .

Ground Zeroes runs on the new Fox Engine and will focus on open-world game play for the first time in the series’ history.