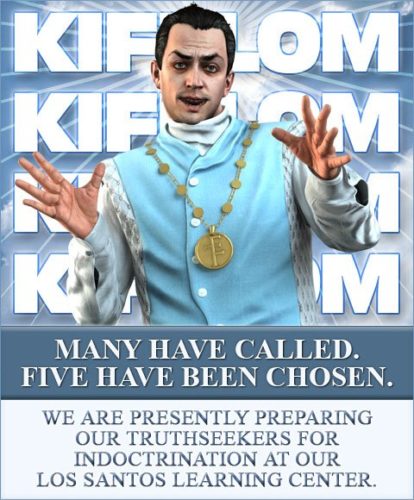 The Epsilon Program is Rockstar’s parody of the Scientology church and it is present in Grand Theft Auto 5. Although not related to the main mission, there is an Epsilon mission that you can get, Epsilon robes that you can wear and the Kifflom achievement to unlock if you complete these missions. Not to mention the fact that if you’re not looking for enlightenment in the game, you can also make a ton of money with this Epsilon mission.

And since money is something that we always want in the game (and not only), I have decided to create this GTA 5 epsilon mission guide to ease things for you.

1. First of all, in order to get access to the Epsilon Missions in Grand Theft Auto 5, as Michael, you have to go to their in-game website (epsilonprogram.com) and take a test there. After that, a new marker – a question mark will appear on your map.

4. Again after some time, there will be a new meeting and this time you will get a mission to deliver some high end cars. You can purchase most of them in the in-game store and that’s the easiest option. Don’t worry too much about money, as we’re talking about profits of over a million after you’re done with the Epsilon mission. The other cars can be found in specific areas on the map.

5. After delivering the cars, you will have to pay an extra $10,000 to the Epsilon Program. Now you will get the strange mission of wearing the cult clothes for 10 days in a row.

6. You can get the Epsilon robe now by ordering them online from the in-game store of the Epsilon Program (which was unavailable until now). You will have to wear the clothes for 10 days in a row, but you can sleep a little bit to fast forward time. Also, you can do other missions in the meantime and even play as other characters as long as Michael does not change his clothes.

7. Afterwards, there’s a new mission that has you fly a plane and challenges you to run no less than 8 miles in the desert. A good way to do it is to run in a circle, but it will be a looooong and boring run. But it’ll be worth it and this is your last challenge!

8. After you complete the mission, you win the trust of the leader. Now you will have access to their car with $2.1 million. You can either choose to go to the destination and lose the money (but gain in-game enlightenment), or you can take the money for yourself by either killing the followers or running away with your car. Whatever option you choose, you will also get the Kifflom achievement.

There are some players who say that during the Epsilon missions, they no longer receive the e-mails. If that’s the case, simply wait a little bit longer or go to the destination area of the next mission in the series and it might start automatically.