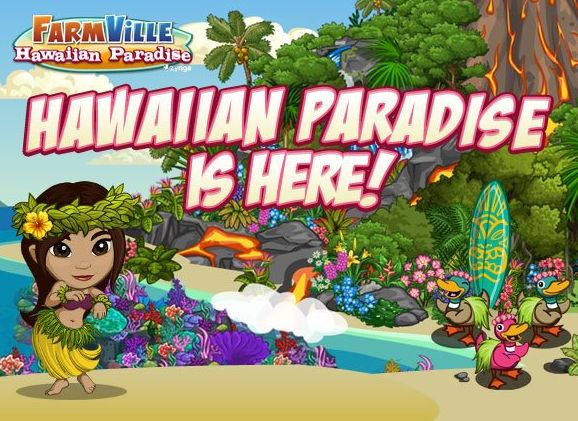 At the rate Zynga is releasing new farms in FarmVille, we’ll probably have to start hiring virtual farmers to take care of them all: a fifth FarmVille farm will be released sooner rather than later, the Hawaiian Paradise farm and I am here to share with you all the early details about it.

First of all, it’s worth noting that pretty soon you’ll start seeing the loading screen that you can see in the image to the left, announcing the introduction of the Hawaiian Paradise Farm in FarmVille. This new farm will be made available early to VIP users (who accept to pay 45 Farm Cash for early access) and the focus here will be on aquatic plants and animals.

And, of course, everything will have a Hawaii feel so you can expect to get your own vacation paradise in FarmVille pretty soon.

Fortunately, prior to the game’s launch, Zynga has also launched a short video presenting the Hawaiian Paradise Farm in FarmVille and you can check it out below, for a glimpse of the new animals, buildings and the overall feel of the fifth farm we’ll get to grow crops on and decorate as we wish:

What do you think about the FarmVille Hawaiian Paradise Farm?