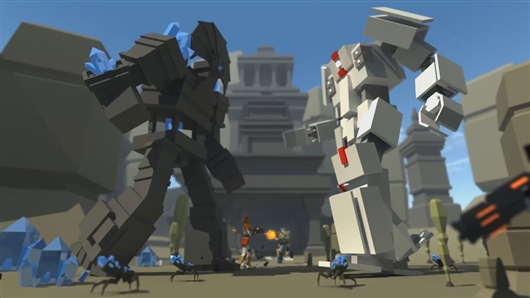 The Steam Early Access shop is the press-your-luck variant of a typical marketplace. Games are never really what they claim to be as nearly every title is in some sort of early access beta, buying a half-finished or less product for the promise of what’s to come. Being leery of such a design philosophy is only natural, after all unless a game’s concept truly resonates with you then it is best to stay away. Every so often there are gems that show themselves like with Next Car Game but most of the time Early Access is filled with titles that won’t really materialize into anything special.

Every so often an intriguing game makes it through the Early Access phase, and most recently that game would be Minimum, developed by Human Head Studios who is most well known from their 3D Realms backed Blue Oyster Cult laden Prey which wasn’t a game that was remembered years after in a positive light. In fact, most people don’t remember Prey was a game, but that’s besides the point as Human Head has released its first original PC title in almost 10 years with Minimum, a game that lives up to the title well from the name alone.

Coined from the art style that Human Head thought up, it’s a unique take on the block art fad that’s become a dominant aesthetic for indie titles ever since Minecraft became popular. Though it uses the minimalist approach to the graphics to emphasize the action found in either the varied weaponry or the robots battling it out in the middle of the map. The weapons themselves, while not finished, promise to be varied enough to introduce separate playstyles in conjunction with different armor sets which also grant stats depending on what the player deems a necessity. There’s the typical Team Deathmatch and Horde modes which fail to stand out, but the core game mode in Titan is what makes Minimum fun. Taking the MOBA ideal and mixing it with more choices and customization instead of focusing on characters with cemented skills and builds.

As mentioned before Early Access titles are rarely success stories, but Minimum just could be one of the very few as it moves forward as a fully fledged Steam title, though it isn’t necessarily finished yet there is a promise for it to become a fantastic competitive title. Combining elements of a MOBA with a third person shooter while maintaining a sense of balance, Minimum plays like Loudout except competent. Still far too early to have a definitive opinion on the game as features are missing, it has become an intriguing option for people wanting to burn five dollars on a new game while waiting for the Fall to roll around. If all goes well, it could be a game that will remain popular for months to come, perhaps even years.