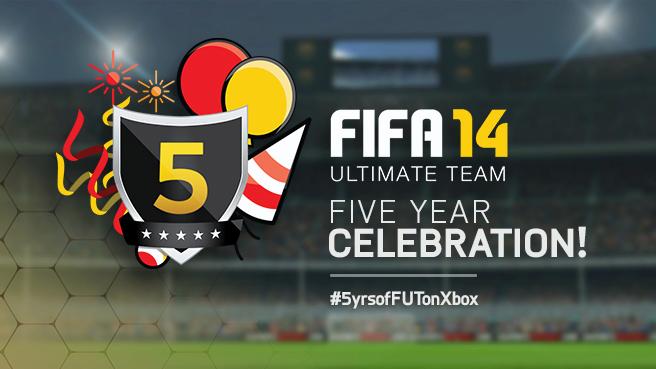 Until Monday, anybody who logs into FIFA Ultimate Team on the console or PC versions will receive five free Rare Gold Packs, which contains a mixture of twelve rare items and players in each pack. The items you receive in this pack will not be available for trading on the Ultimate Team Transfer Market, though. The packs will also not appear on the FIFA Ultimate Team web app, you have to go in game and click on the anniversary banner.

Speaking of the web app, EA is also bringing back the daily free gift for logging into the app, which can be coins, gift packs and other goodies.

In terms of discounts, EA is also offering packs for a reduced rate. The packs in question will change each day, however at time of writing you can get a Jumbo Premium Gold Pack for 5,000 coins, down from the usual price of 15,000 coins you normally have to pay when the pack is offered. A new pack will be put on offer later today.

In addition to these, EA have also released an infographic which details the evolution of Ultimate Team since the mode launched with FIFA 09, which features were added when, for example. They also describe the popularity of the game mode, with 64% of FIFA players use Ultimate Team.

It also says the mode has 21,849,017 unique players have tried Ultimate Team since 2009, 1.46 billion transfers have been listed and 725 million matches have been played.

Happy Birthday, Ultimate Team. I hope you all get better luck than I did with the free packs. Right now I’m enjoying my duplicates of Cavani and Subotić.

What are your favourite Ultimate Team moments? Is it your biggest win or comeback? Getting a fantastic card in a pack? Or something else?