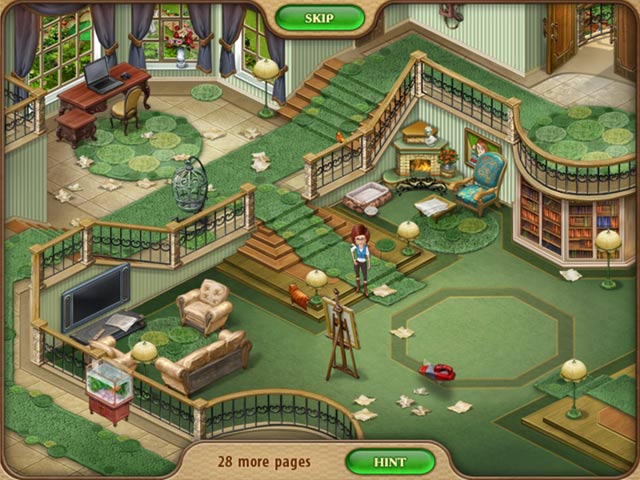 I love any game that tries to do things differently, especially if they actually manage to improve things and not break them, and Manor Memoirs is such a title that I simply have to share with you. Just released over at Big Fish Games, this is an hidden object game that comes with a different presentation than what you’re normally used to and succeeds at delivering a really high quality experience!

Created by the same team that brought us Gardenscapers, Manor Memoirs is described like this: “Even though she’s a bestselling author, Scarlett has lost her inspiration. Leaving behind the hustle and bustle of her big city life, she moves into a beautiful 19th century mansion in the countryside. Unfortunately, this place needs some serious work, so Scarlett calls you for help! Search the mansion for treasures and hold garage sales to turn her ramshackle retreat into a comfy palace! But be careful. You never know what dark secrets you’ll uncover, and they could be the key to breaking Scarlett’s writer’s block!”

Coming from the Gardenscapes creators, Manor Memoirs is clearly a high quality title – one that has some common elements with the aforementioned title. What it delivers is a hidden object game played from a top down perspective, some really cheery visuals and puzzles that manage to remain charming and challenging despite the happy and colorful approach of the game.

I can personally say that this game becomes one of my favorite hidden object games of recent times simply because of its fresh approach and fun style, so I wholeheartedly recommend it to you too. So if you are interested in giving it a try, head over to Big Fish Games and download Manor Memoirs right away!