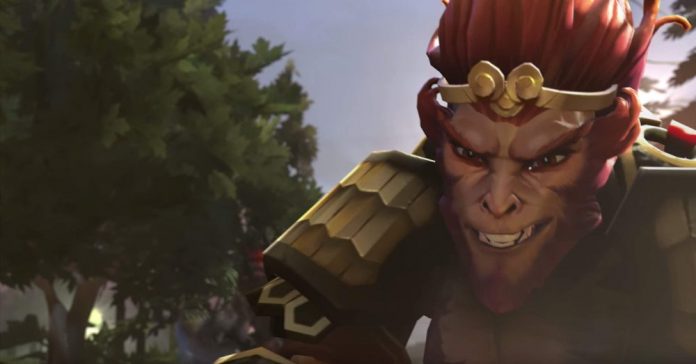 Revealed at the end of play at this year’s International, Valve’s new Monkey King hero for DOTA 2 was greeted in some quarters with a chorus of ‘you’ve got to be kidding’. Why? Well it’s not exactly a startling original concept. League of Legends, Smite, heroes of Newerth, Strife and Vainglory all have champions based on the same character. In fact, the DOTA 2 character will even be voiced by the same actor, Matt Mercer, who voices the Heroes of Newerth Monkey King character. So what gives? In this Year of the Monkey have Valve got their eyes firmly fixed on the Chinese market? Monkey King is, after all, their creation, their cultural equivalent of Robin Hood or Hellboy.

The Monkey King, Sun Wukong, first appears in Wu Cheng’en’s sixteenth century ‘Journey to the West’, recognised as one of the four great novels of classical Chinese literature. It’s based on the exploits of a real life monk and with its mixture of historical fantasy and outrageous fantasy it’s an early forerunner of magical realism. Shape shifting, demon killing Sun Wukong breaks all the rules, he comes back from the dead and he challenges the authority of heaven. His ability to change shape at will and shrink his staff to the size of a needle make him of one the world’s first superheroes.

And like all superheroes he suffers from human weakness, greed, selfishness and outbursts of extreme violence. Monkey King was there in the opening sequence to the Beijing Olympics and Xiaopeng’s Monkey King: Hero is Back was the biggest grossing Chinese animated film of last year. So, if you think of Monkey King more like a Superman character then you can stop worrying about whether he appears in other games or not. Here is the trailer for the New Monkey King:

Valve haven’t released any specific information about their new hero beyond the teaser trailer and the trailer doesn’t reveal that much. Monkey King has his magic staff, of course, but its specific properties remain unknown. Like the Monkey King of Journey to the West, the trailer suggests that he’s a shape shifter, able to trick his opponents and replicate himself. There’s a glimpse of some of his moves and attacking techniques but beyond that not much more.

Reservations you may have about this character are misplaced, this is a big character for a big game. DOTA 2 is the top ranked game in terms of competition prize money and it’s the third most betted on E-Sports game. The Monkey king will be unleashed, with the game’s new update, The Journey, this fall: make way for a new superhero, DOTA 2 is just the format the Monkey King has been waiting for.