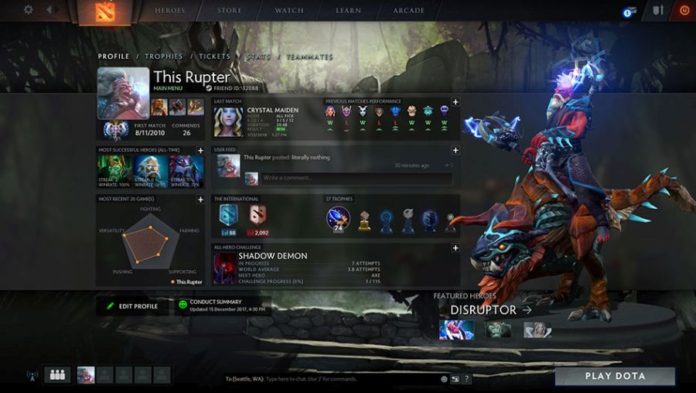 DOTA 2 seems to be refreshed in 2018. Valves has come up with most awaiting biggest-ever update! In the world of the game, Valve Corporation has shared significant contribution in the 21st-century gaming era. It has recently grown into one of the largest and most consistent game publishers and game developers in the world. ‘Spring Cleaning 2018′ update includes the gameplay patch 7.08.

Valve Corporation has now been more involved than ever in the running of individual tournaments. This DOTA 2 update is a combination of two hotly-anticipated patches i.e. spring cleaning update and valve’s planned bi-weekly game play patches.

– Renewed Player Profiles, the update includes to keep up with Dota’s new two-week patch schedule, the client will notify you about changes to heroes in your games. Along with this, you can use your gathered loading screens as player profile backgrounds now.

– Improved buyback notification, you can keep your battle plans up-to-date with more prominent notification on the top bar portraits and in the kill feed. A new tab for the live pro circuit tournament has been added to make sure that you never miss a pro match.

– In terms of keeping a warm community spirit, the valve has announced the implementation of six-month matchmaking bans for those with an extreme frequency of the negative behavior.

– There are even a few cosmetic changes like custom game improvement which includes a tab revamp, penalties for queue leavers and ‘AFK checker’ for devs.

– While twists to party queuing include a ‘ready-up’ prompt which allows other players besides the captain to invite and an option to have the out-of-game task bar icon to flash when an invite arrives.

– For better convenience, you can lay your hands on some of the unique accessories like DOTA 2 graphic mouse pads, latest keyboards etc. If you are really into the game, you will be glad to know that you can even avail heavy discounts on those accessories by browsing through various coupon websites. When you are looking for players to fill out your party you can now use active friend filter to find an active partner with whom you recently played with.

– To help keep track of natural resources, the minimap neutral difficulty icons help to show the difficulty level of each creep camp.

– By team teleport status, Teleports will now be color-coded to make it easier to see who’s coming to your aid, towers will crumble as they take more damage, you have the option to redeliver courier items more easily.

– This year’s update includes balance patch 7.08, with changes to a whole bunch of items and heroes. The biggest of those seem to be to Alchemist and Medusa, but there are also notable changes to Morphling and Omniknight.

– By using language-based matchmaking you can help to improve the lines of communication between team-mates, your selected language is now a much greater factor when determining matchmaking.

At last, in addition to the slew of annual bug fixes, which almost extends the page longer than the game play fixes. The most notable bugs also fixed.