Tomorrow is a big important day. Not because its the International Women’s Day – but mostly because the 5th part of the ‘Devil May Cry’ series comes to life. After an 18 years journey, Dante and Nero are not even close to finish their journey.

Moreover, the Devil May Cry 5 Wikipedia page claims there will be another playable character – called V. 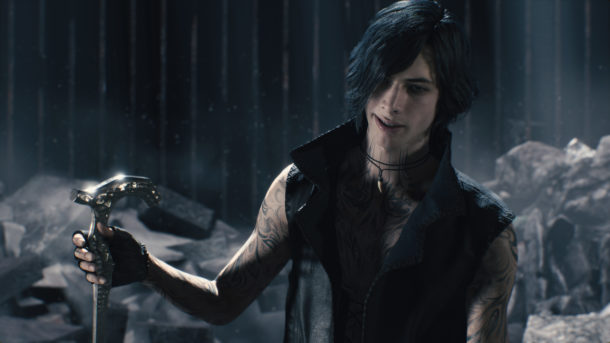 We still don’t know too much about V – but we’re sure that this new character would be amazingly fun to play and will probably come with a bad ass character as we’re used to. What we know about V so far is that his character is shown wielding a cane and a book and its fighting style is completely different compared to the Dante or Nero’s one. According to a trailder from the Game Awards 2018 – V uses three demons based on enemies from the first game:

Is Devil May Cry 5 Worth Playing?

The game is directed by the veteran of the series – Hideaki Itsuno. It runns on the RE Engine – as used previously in Resident Evil 7: Biohazard. The game was created to be ”photo-realistic”, as Hideaki declared. Moreover, there would probably be a 60 FPS cap on all targeted platforms.

Even though Devil May Cry 4: Special Edition was not a success, Itsuno declared that the future of the series doesn’t depend entirely on that game. He then started working in secret on the Devil May Cry 5 and in 17th May 2018 – the domain “DevilMayCry5.com” was registered under Capcom’s domain register – leading to rumors of the game. The game was planned to be presented to the public in 2017, but the team decided to announce it alongside Resident Evil 2 Remake.

The game was also created to support a multiplayer for up to 3 players, but Itsuno stated before:

“What we want to say is we have designed this game specifically to make the best single-player experience we can, that’s always been the focus,”

Its nice to see that in a land predominated by multiplayer focused games, the series that amazed us with fantastic single player games will not change their style too much.

Right now, Devil May Cry 5 have an amazingly great score on Metacritic – 88 out of 100 points based on the opinion on 47 critics. We can only assume the game is pretty great if the critics acclaimed it so much.

The gameplay looks perfectly made. A combination of stylish combat gaming and a story with enough depth to keep any fan of the series entertained are what the 5th part of the series promises to its players.

If some people think this is the glorious come-back of the Devil May Cry series – you’re perfectly right. The artwork is great, with a massive amount of details, new monsters with special powers and more powerful bosses than before.

The RE Engine offers the game the ability of running on 60 FPS but on 4K quality. This makes it perfect for any hack and slash fans.

One thing that we’re still wondering right now is – who ripped of Nero’s hand? Because on the DMC 5 – Nero lost the Devil Bringer and now use the Devil Breaker.

Itsuno gave us a few hints on what will change with this modification. There would be some Telephone Booths where Nero could call Nico and tell her “Hey, I just beat this boss and found this awesome material, see if you can find something with this”.

And by this, Nero’s Devil Breaker power will upgrade continuously as he advance in his adventure. But one thing you should know about this – his power won’t last forever and it would need a few reparations done on it. Itsuno wanted to include the ‘resource management’ feature into the game – to make it more challenging for the DMC enthusiasts.

Some rumors also claims that Dante’s personality changed. Instead of being the reckless bad ass funny one – he’s now the wise guy who needs to make the hard decisions. The jokes and the funny commentaries that we’re used with from the previously DMC series are now Nero’s job.

To Attract the new players that didn’t played the series, the team introduced an Auto-Assist system that could help beginners get attached to the DMC series. However, if you’re a die-har fan of DMC – you could turn that off. More fun things & awesome facts can be found in the video below:

Where To Buy Devil May Cry 5 At a Low Price

There are plenty of places where you can buy the game at a decent price- depending on the platform:

For the PC fans, we have some great news from the Fanatical.com:

The same thing is available for the Devil May Cry 5 Deluxe Edition – where Fanatical.com have discounted the price from $70.44 to $56.35. You can use the 25OFFDMC5 code to get an extra discount.

For the people that want the download version of the game, they could pre-order Devil May Cry 5 from the Microsoft.com website.

For the ones that prefer the package version of the game, you can buy it from Amazon below:

The package version of Devil May Cry 5 is also available on GameStop or BestBuy.

The download version of Devil May Cry 5 can be purchased from the PlayStation Store.

The Package edition of Devil May Cry 5 can be bought from GameStop, BestBuy or Amazon below:

We hoped that you liked our review & stay tuned for more articles about Devil May Cry 5.