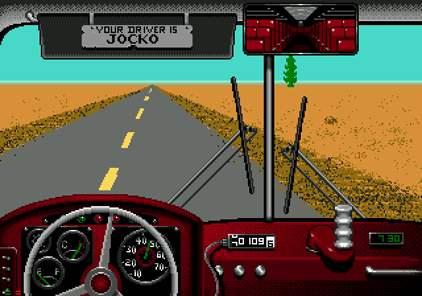 One man. One Bus. Three hundred and sixty miles of simulated post-apocalyptic desert, and the endless struggle between man and nature personified.

Such is the description of Desert Bus, probably the most realistic and hated games of all times that was the brainchild of illusionists Penn & Teller’s unreleased video game “Smoke and Mirrors.” Your objective is to drive a tour bus for eight hours in real time without pause. It’s a straight road but the bus constantly lists to the right, which means you’ll have to stay awake during the eight hour trip to steer the bus.

Previously played annually for the Child’s Play charity in Desert Bus for Hope, you too can now experience Desert Bus via iTunes or Google Play for only $.99 and help out the charity as well.

The question is: Do you have the fortitude to make the virtual drive?