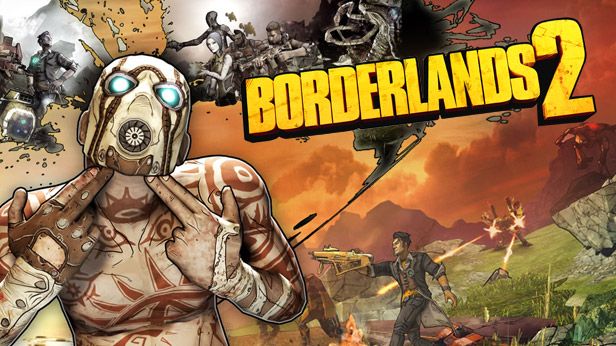 Shoot and loot will soon be back when Borderlands 2 hits consoles and PC next month. I’m a big Borderlands fan I’ll say that right from the start. Its a very refreshing first person shooter to me with is quirky sense of humor, colourful semi cell shaded graphics and a fantastic loot system that keeps you playing in the hope of finding that one special gun. In a world that’s filled with an endless production line of military shooters that are obsessed that multi player combat, Borderlands really sticks out from the crowd and does something a little different. There’s no multi player other than co-op and you either love or hate the graphical style of the game, but the games industry really needs titles like this and all power to Gearbox Software who make the game for doing something different from the norm.

Borderlands 2 drops you back into the weird and wonderful world of Pandora filled with bandits, killer robots and many other hostile creatures that generally want to do you harm. Pandora is once again a troubled place with the brilliant, charismatic and utterly despicable CEO of the Hyperion Corporation, Handsome Jack who is now running riot with his army of killer robots and threatening to take over the whole planet.

There aren’t to many changes to the overall Borderlands formula in Borderlands 2, but there big changes to the characters that will be playable. The characters for Borderlands 2 are all new, although many share similarities with the playable classes of the first Borderlands. There is Maya the Siren who can use magical attacks and has healing powers that can be used in co-op play, Zer0 The Assassin who can use swords as well as guns and has stealth powers that can confuse enemies, Axton The Commando who can set up gun turrets that deal massive amounts of damage and last but not least Salvador the Gunzerker who can dual wield huge weapons and is a real front line soldier. There are plans to introduce a 5th character class at some point called the Mechromancer for which currently there is no details of what skills this class will have. The Mechromancer will be DLC, but if you pre-order the game you will get this class for free when it becomes available along with some other goodies which I will mention later. Lilith, Brick, Mordecai and Roland, the playable characters from the original game still appear in Borderlands 2, but as non-playable characters that show up for story reasons.

One of the things that set Borderlands apart from other shooters is the RPG elements and leveling system that it has. Every time you level up you can pick a new skill or improve a current one from the skill tree which has been redesigned from the previous game to feature many more skills that are relevant to your character class. The storage system for your weapons and loot has also been improved and you can now trade items with your co-op friends.

Gearbox are claiming that Borderlands 2 is almost twice the size of the original game with many more side missions to do which is quite a claim as the original Borderlands wasn’t exactly a small game so the sequel will really eat into your spare time if you want to get to the end of it. Also with the addition of online co-op, split screen co-op and with up to 5 different characters classes to try out there is a lot of game here for your money. There was co-op play was in the original game, but there does seen to be more emphasis on it this time round with some of the more power character based attacks can be combined which will be helpful to take down the bigger enemies that you encounter.

There are some nice pre order bonuses with Borderlands 2 that give you some extra items to get your loot hunting off to a good start. . As I mentioned earlier you will get access to a new character for free called the Mechromancer when it becomes available and you will also get the Gearbox golden gun set, a golden key which unlocks a rare chest that has some mystery loot inside and a vault hunters relic which you can equip to you character to boost your gear hunting fortune as you play.

Borderlands 2 has had quite a long development cycle, but it looks like it was time well spent from what I’ve seen of the game so far. It promises to deliver a bigger and better single player and co-op game with more guns, more loot and more things to shoot. Sometimes more is just better. Borderlands will be released in North America on the 18th of September and in Europe on the 21st of September for Xbox 360, PS3 and PC.