You probably know by know that Take Two are aces when it comes to promotion of their video games. If you didn’t know that, now you’ll find out since the company started a viral marketing campaign for BioShock II, the upcoming shooter which is anticipated to rock the charts upon release.

But that’s not what we’re talking about now, but the teaser website launched by the company, There’s Something in the Sea. Although it doesn’t offer too much at the moment, except for a Big Daddy doll and some newspaper clippings (regarding the kidnapping of the 7-year-old Maura Clune) and a letter speculating on the kidnapping, it is enough to keep us wondering and want to know more. Of course, we’ll have to wait.

And while we do so we might be seeing some other surprises from BioShock II’s developers and publishers – for example some similar, real life posters as the one you can see below (which was spotted by Kotaku). The poster, just like the website, teases that There’s Something In The Sea. What is it? What is it? 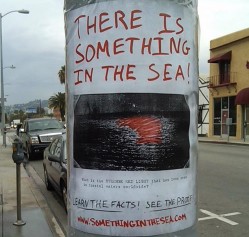