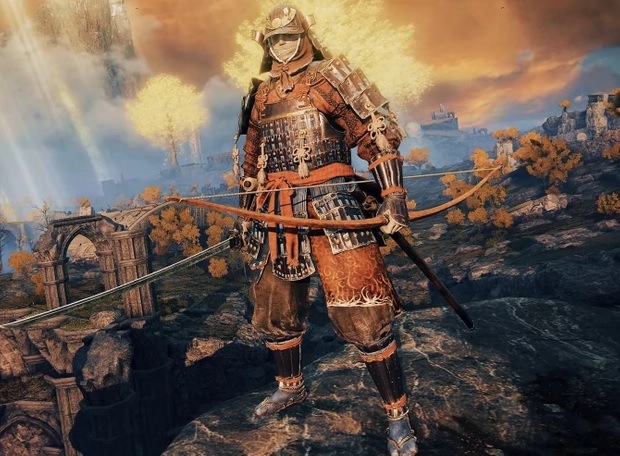 If you’re new to Elden Ring, there’s a good chance that you’re a little unsure about choosing a beginning class. Don’t worry; this is normal! Before you feel too intimidated by the game, we recommend starting with the Samurai class. This particular class is perfect for beginners, thanks to its versatility.

You get to do things like hit your enemies from far away with a bow and arrow, then use a katana when they get too close. Additionally, the Samurai class equips you with a fantastic set of armor at the beginning of the game.

However, there are several sets of armor to choose from. This is where we come in, with a list of recommendations to help you choose the best armor for the Samurai class in Elden Ring.

About Samurai Class in Elden Ring

The Samurai class in Elden Ring begins at level nine. It has several great attributes that we’ll examine in the next section of the article, and numerous other features.

One of the best things about the Samurai  Class is that it has a reliable starting weapon, a flexible and useful longbow, and a katana. It’s important to note that when you start building the Samurai class, you must focus on Dexterity and Strength. This is because they will help in situations of combat. Additionally, you must focus on building Vigor to help sustain your character when faced with combat. In addition to Dexterity, Strength, and Vigor, Endurance is another important attribute in the Samurai class. It will help you when using bows and arrows.

As its name indicates, the attribute Vigor will help you survive getting hit in a combative situation for much longer!

A tip we’d like to share with you is that when you first start playing the game and building the Samurai class, selecting the Golden Seed and maintaining it as a keepsake would be best. It can help provide you with either 1 extra Mana Potion or 1 Healing.

It’s important to note that in this class, you will use arrows a lot in the gameplay. The arrows allow you to kill and defeat your enemies while also helping you save time and preserve your character’s strength.

Attributes of the Samurai Class

The Samurai class has several notable attributes that are listed below:

The best Samurai armor in the Elden Ring offers players various advantages, like protection, the ability to defeat enemies easily, and they are found in various locations that are scattered throughout the game. Choosing armor is a skill in itself because the armor that you select determines how your game is going to go.

For instance, there is armor designed specifically for endurance, so it won’t make sense to choose armor that will help you run fast! Therefore, when selecting armor, it’s important to be completely honest about how you plan to approach the game. For example, if your attribute of choice is intelligence, it doesn’t make any sense to choose armor built with endurance and strength in mind!

It’s also important to note that there isn’t a single specific type of armor that is better than its counterpart. The difference is that you must choose a type of armor that caters to your gameplay style and goals when playing Elden Ring.

In this section of the article, we’ll walk you through four types of Samurai armor, how resistant it is, and how much it negates damage. Let’s take a closer look.

One of the most interesting features of this set of armor is that it consists of iron plates that are banded together. Since this set is popular and highly coveted, it’s safe to say that it isn’t the easiest set of armor to find! Please note that you will find it only later on in the game, so it’s a good idea to keep an eye out for it.

The White Reed set consists of four separate pieces of armor. These are the White Reed Gauntlets, the  Okina Mask, the White Reed Greaves, and the White Reed Armor. You’ll be able to find the armor inside the Spirit Caller’s cave, which is located on the Mountaintop of the Giants. It’s important to note that to collect all four pieces of the armor set, you must first complete several quests. You will also need to obtain a stone sword key if you want to access the Spirit Caller’s cave, and to do so, you have to either buy the key from maiden husks or merchants in the game.

Additionally, to collect the Okina Mask, you must defeat the Bloody Finger Okina at the Mountaintop of the Giants.

The White Reed Armor has a damage negation of 22.7, and it also gives a wonderful immunity boost of 159. The damage negotiation stats for this suit of armor is as follows:

In addition to damage negation, every suit of armor also has a certain amount of resistance in various areas. The resistance for the White Reed armor is as follows:

When it comes to suits of armor that you want to have on your side, Ronin’s set is definitely something you want in your arsenal. In terms of its weight, this suit is much lighter than the White Reed set. It comes with greaves, an iron Kasa, Ronin’s armor, and gauntlets.

Ronin’s set has an overall damage negation of about 25, which is broken down into the following stats:

In addition to damage negation, Ronin’s set has a good amount of resistance, broken down into the stats below:

The next Samurai armor that we highly recommend is the Land of Reed’s set. When you start playing at this level of the game, this is the first suit of armor that you will wear. It is built with iron strips that are fastened together. One of the most interesting things about Elden Ring is the amount of attention its creators pay to detail. Since suits of armor often had strips of fur on them in medieval times, the Land of Reed’s set also has strips of fur on it. However, you can definitely customize your Land of Reed suit and remove the fur if you don’t like how it looks.

This suit’s average damage negation is 22.8, which is broken down into the stats below:

Along with damage negation, every suit has resistance. The resistance for this suit is broken down into the stats below:

The final set of Samurai armor that we’re recommending is the Briar Set, and it’s safe to say that we’ve saved the best for last. While it is heavier than the other three sets of armor on our list, we can assure you that this set, in particular, is ideal to defeat your opponents in battle! You can buy it from the Finger Reader Enia in Roundtable Hold.

Its average damage negation is 25.5 and is broken down into the stats below:

The resistance for this final suit of armor is as follows:

In this article, we walked you through a list of four of the best suits of Samurai armor in the Elden Ring video game! Each armor set has its advantages and disadvantages and strengths and weaknesses. As we mentioned in the second section of this article, it’s important that you know what your gameplay is going to look like when choosing armor. Each suit mentioned here suits a different style of gameplay, so we hope our descriptions helped you!