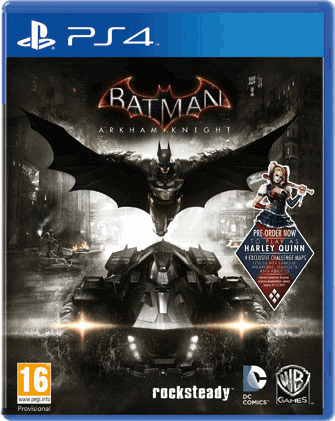 The next game in the Arkham series of Batman games has been announced as Batman: Arkham Knight.

The game was first brought into light following a listing earlier today on GAME, which revealed the box art and the introduction of the Batmobile into the series, a pre-order bonus allowing players to play as Harley Quinn and describing it as the “explosive finale” to the Arkham series.

The release was confirmed by Game Informer when they revealed the game as the cover of their newest issue of the magazine.

The Game Informer reveal confirmed that the Batmobile will form “a core element of the gameplay.” The game will feature a number of iconic villains from Batman, including Scarecrow, Penguin, Two Face and Harley Quinn amongst others.

In a brief video on the site, members of the Rocksteady development team discussed what would be the final entry into the Arkham series.

Rocksteady’s Sefton Hill says that: “The game takes place one year after the events of Arkham City and Batman is at the very peak of his powers.”

Hill concludes that: “This is the natural end for the story. We really want to go out in style.”

US retailer GameStop has listed on its website that Arkham Knights is scheduled for release on Tuesday the 14th October on PlayStation 4, Xbox One and PC. This indicates a 17th October release for Europe.

The first trailer has been released by Warner Bros. and you can have a look at it below:

What are your thoughts of the details released so far? Are you excited to finally be able to drive around Gotham in the Batmobile? What else do you hope we’ll see in this final instalment?