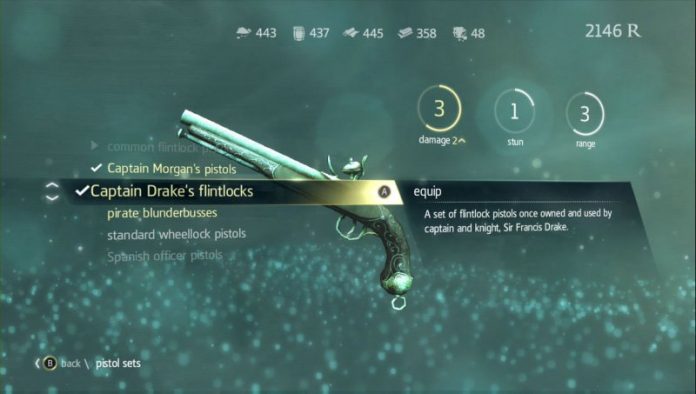 Depending on where you pre-ordered Assassin’s Creed 4 from, you will receive some extra content. I am here to help you locate that extra content as it might not be automatically applied. In this article, we’re going to talk about the Assassins Creed 4 exclusive weapons, like the Golden Swords, Captain Morgan’s Pistols, Captain Drake’s Swords and Captain Drake’s Pistols. So let’s get this started!

Where to find the Golden Swords in AC4

You’ll find them in a Gold Chest on the Florida islands. Once you collect this chest, the golden swords can be found in the Captain’s Cabin.

Where to find Captain Morgan’s Pistols in AC4

You will have to collect the pistols in the Black Island Mission. Afterwards, they are available in the “Pistol Sets” menu.

Where to find Captain Drake’s Swords and Pistols in AC4

You will have to collect the pistols and swords in the Sacrifice Island Mission.

Hopefully it is now a lot easier for you to get your exclusive weapons!