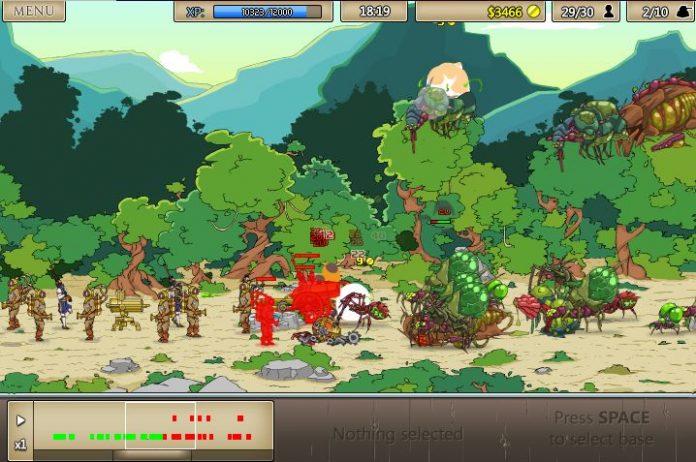 I told you that I really loved playing and beating Army of Ages and now I returned to share with you some tips and tricks in a strategy guide that will help you get better at battling alien scum and saving human kind. Basically, Army of Ages is not really a difficult game, but it gets challenging and a lot of quick thinking and preparation is required. So hopefully this guide will help you out.

Now let’s check out together some Army of Ages tips and tricks for a perfect strategy!

1. First of all, get used to knowing the two tiers of buildings: tier 1 is cheaper but units have lamer stats while tier 2 is the one you should want for extra power (but they are expensive and produced slower). Basically, a balance should be found between the tier 1 and tier 2 buildings and I had a great success with the following building strategy:

– As soon as the new age starts, I build up 2 tier 1 offensive buildings plus the water carriers, and 3 tier 2 buildings. Then, as soon as I have the chance, I sell one of the initial tier 1 buildings and purchase a similar (but better in stats) tier 2 building

2. Try not to purchase your water carrier building first: they are the weakest and you will lose some momentum at the start of the age and aliens will get closer (since when you evolve all your units disappear)

3. Even though probably some extra balancing when choosing weapons could be better, I had a great run building structures that produce units effective against both air and ground. So I would recommend the same instead of over-specializing your troops.

4. Try to gather some extra experience before evolving and trigger it after you’ve used one or two super powers – this gives you some time to build your army and keep the aliens at a safe distance.

5. When it comes to upgrade strategy, I prefer to upgrade the production speed first (to at least 3 units) in order to have the numbers. Only then I focus on improving their attack, speed and health, in this order. You can get some help early on by using the special powers.

6. And when it comes to these special powers in Army of Ages, I found out that the arrows are the best and they still produce a great deal of damage even in the last age. They are the best choice for a super-power and they are cheap to use!

7. And don’t forget to actually change the well that your workers get water from as soon as you have it secured: you can’t say no to the extra money!

And this is the basic strategy that I employed in Army of Ages, with great success. Hopefully these tips will help you and you’ll be able to extinguish the alien invaders without any trouble.