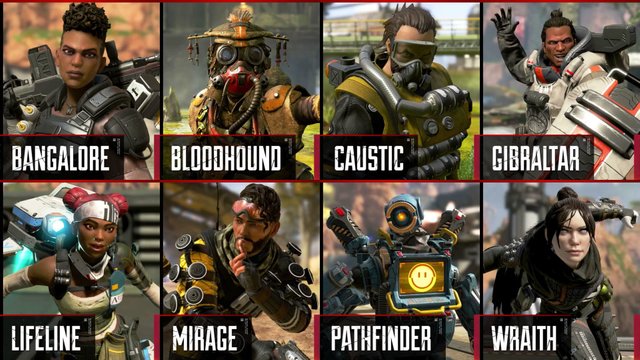 Apex legends is a great game, no doubt about it, even though there are some really bad players among you. Though never fear my friends that just started playing Apex Legends, I’m here to help you by telling you the best character from Apex Legends.

This one hurts me to say as this emo is my main, I even bought him with apex coins as I wanted to try him so badly. While when holding a defensive position he can be exceptional, when doing pretty much anything else he feels quite weak (although it is fun landing on the gun ship and gassing everyone). 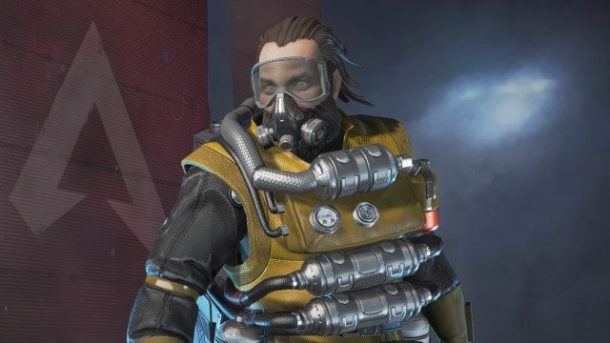 What I think makes Caustic so situational is his passive (you can see people affected by your smoke) this doesn’t really add to much to his effectiveness as you can see through smoke with a threat detector scope anyway.

His ultimate ability isn’t too great either as it is essentially his gas mines with a big more range. If you still want to play as caustic I would suggest teaming up with a path finder as to see here the next ring will be and set up you defences early. Caustic is a great Apex Legends Character, but its not among my favorites.

Without a doubt the most annoying legend, Mirage has one powerful ability, Psyche out. When you hit the tactical ability button a perfect replica of mirage runs to the players chosen position. This is a great distraction, especially as it tricks things like threat detector scopes and blood hounds tracking abilities.

I still find myself falling for these guys and by the time I realise my mistake I’m often dead. Where Mirage really falls short is his passive and his ult. 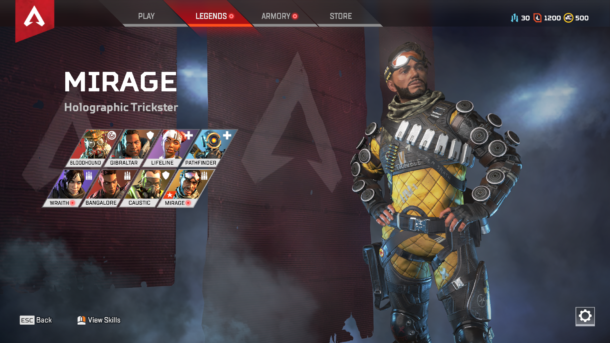 Going invisible when knocked down is useful, but at that point the fight is likely already lost( although I will note this pairs great with a legendary knock down shield) and his ult just isn’t very useful as when cloaked he’s still pretty visible. If you want to get good as mirage, practice ways to fool people with psyche out. This is a good Apex Legends character for people that likes to Play Rikimaru in Dota 2 or Shaco in League of Legends.

Pathfinder is my favorite character from a personality perspective. He feels inspired by claptrap but not a rip-off, like destiny 2s fail safe. His abilities are certainly fun but don’t feel too powerful.

My favorite thing about pathfinder is his passive, which lets you hack into beacons around the map to see where the next ring will be. This is pretty powerful as it lets you plan slightly longer term than you otherwise would be able to. 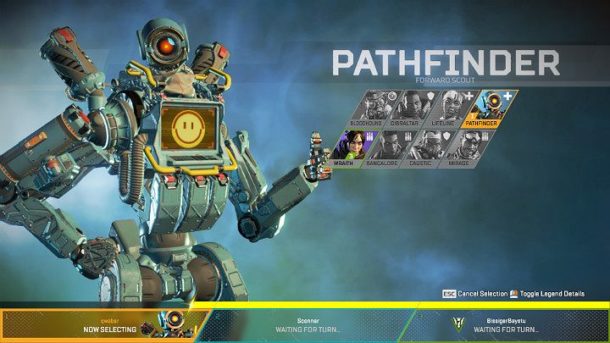 His tactical ability, the grappling hook has a really high skill ceiling, there are clips of players launching themselves super-fast and shot gunning their foes down, this sadly isn’t the reality of pathfinder as whenever most players attempt something like this they slowly pull themselves toward an enemy, out of shotgun range and get themselves sprayed down with an R-99.

His ult feels lacklustre too, deploying a zip line for your team to use is useful but it often telegraphs your location to nearby hostiles so you’d be safer on foot. Pathfinder is among the best characters from Apex Legends, but there are a few better than him.

Before we get into the top 5 its worth noting that a lot of these could be changed around depending on playstyle. 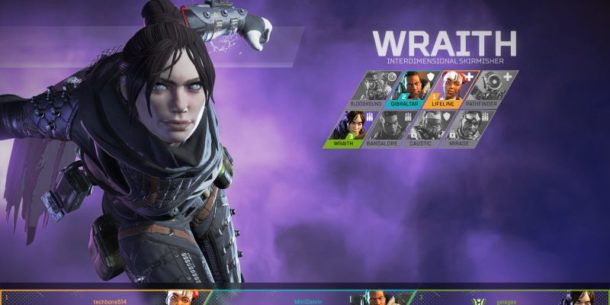 This pick may be a tad controversial, but I just can’t stand Wraith. Her ult, Dimensional rift lets you create a portal between 2 locations. My problem with this is that Wraith has to physically place both the entrance and the exit to the portal, so it’s only useful for backtracking, in my opinion.

And of course there’s the fact that anyone can use the portal. Her passive, voices from the void, gives an audio cue when targeted or there are nearby traps. I just don’t find this to be all that useful as you don’t know where the threats are just that they’re there. Wraiths tactical, into the void, in my opinion is the most over rated ability in the game, I will include the description from the wiki for it as it’s hard to explain:

” Upon activation, you enter the void. While in the void, everything looks gray to you, you are invulnerable, and your outside appearance is obscured, making you difficult to follow. In addition, you cannot see other players for the duration. You still follow the normal rules of movement, such as climbing up obstacles and sprinting, although you are unable to open closed doors, nor can you collect ally’s beacons. You will leave a faint trail that can be used by enemies to track you.”

That last sentence is what really kills this ability for me as it’s really easy to track and kill the wraith. Despite all this in the hands of someone with more experience as Wraith she can be quite powerful. On a side note I recommend you check out the lore around wraith as it’s quite interesting

If we were just ranking passives Bangalore would be number one by a long chalk. Double time is an extremely powerful ability as when shot at Bangalore runs much faster. This allows you to evade fire, find cover or even close the gap.

This has saved me countless times and it’s sorely missed when I go back to playing someone else. Her tactical ability also helps her to evade fire and find cover. Smoke launcher as its known shoots smoke grenades (duh), which can also do a very small amount of damage to enemies. 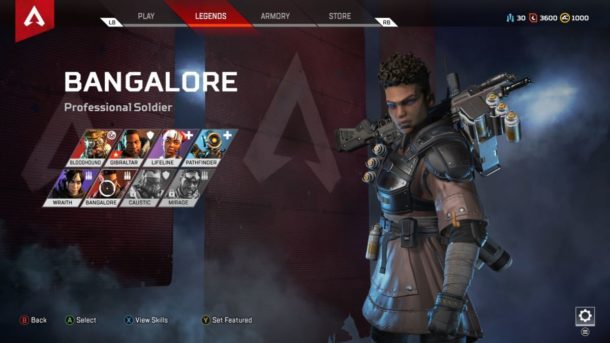 Her Ult Rolling thunder is a very useful tool when pushing enemies out in the open as it essentially calls in a rolling air strike. While not a death sentence if caught in it, it can certainly turn the tide in your favor.

If you like playing the tank roll, this guy is for you. Another character with a strong passive Gibraltar has a gun Shield, in the style of Blackbeard from Rainbow 6 Siege.

This alone can win fire fights as it mitigates some incoming damage. His strengths don’t stop there though, he has a dome shield, which blocks all damage, allowing you to quickly heal, reload or even revive an ally. 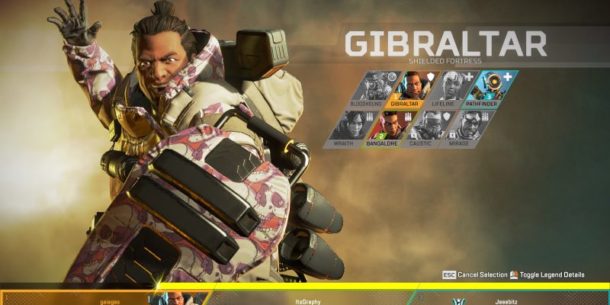 The dome shield goes very nicely with his ult too. Which is similar to Bangalore’s rolling thunder but in a smaller more concentrated area. When hit with defensive bombardment players get quite significantly stunned.

This means that if you’re being rushed, throw down your ult and hide in your dome shield and let the enemies struggle to get to you. Really there’s not much to say about this legend, he’s just simple and effective.

The amount of information that this creep brings to the table is unprecedented, he’s an actual stalker.

The amount of things that his passive, tracker, shows you is crazy, here is a list from the wiki:

Crazy. You can then use all this information to either hunt down or avoid enemies. His tactical ability, eye of the all father, is for all intents and purposes a short range wall hack, which can be seen by your whole squad! 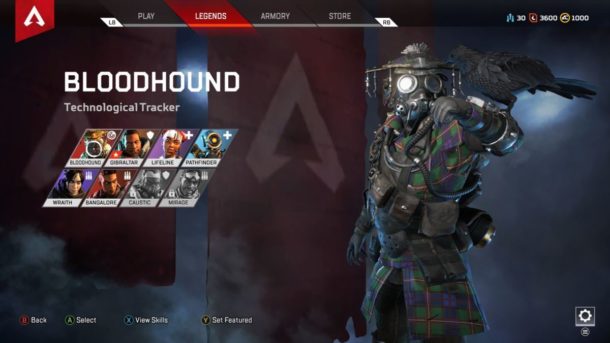 Even if he didn’t have an ult bloodhound would still be one of the better legends in the game but as it happens he also has one of the best ones. Beast of the hunt turns your screen black and white, while highlighting enemy players in a bright red. Other powerful abilities you have while in Beast of the hunt include increased movement speed and being able to see cold tracks, further increasing your info gathering capabilities.

While Lifeline is the best legend in the game is also the least flashy. Don’t take this as a negative however as every aspect of her kit is top tier. Let’s start with her ult, calling in a care package containing high quality Armor and attachments as well as some meds is supremely powerful. With a Lifeline on your team you can expect to all have purple armor, which is a huge advantage over teams that don’t. 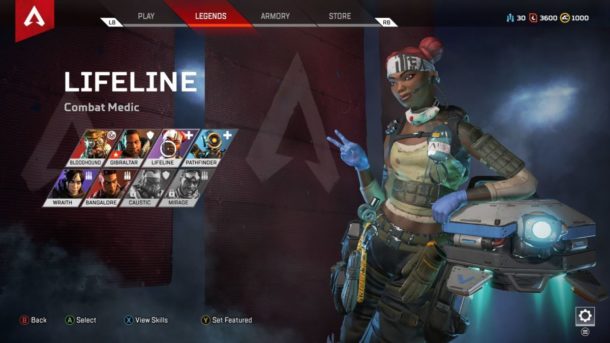 Crafty players may even use care packages as bait, luring enemies into an open plain only to gun them down as they try on their new armor. Her passive gives her squad a massive advantage in any team fight as she can revive fallen team mates faster than other legends.

This is on top of the fact that lifeline drops a shield in front of her when reviving. The cherry on top of this passive cake is her using healing items 25% faster than other legends.

The D.O.C healing drone is probably the least powerful part of her kit. This speaks volumes as to how powerful she is as being able to heal in a battle royal game is no joke because being able to save things like phoenix kits and med kits could save your life later down the road. As a rule of thumb if no one has picked life line and you’re still to pick chose Lifeline.

This is a guest post made by Josh Malcolm. When I’m not playing games, I’m playing with my little dog Monty (you can see him on my Instagram @josh.malcolm14).My favourite games of all time are: all the borderlands games, 2 especially, mount and blade: war band and the extremely obscure robot wars extreme destruction. I’m currently enjoying the excellent apex legends and Hearthstone. Another hobby of mine is trampolining, people are always surprised when they see I’m actually quite good at it.