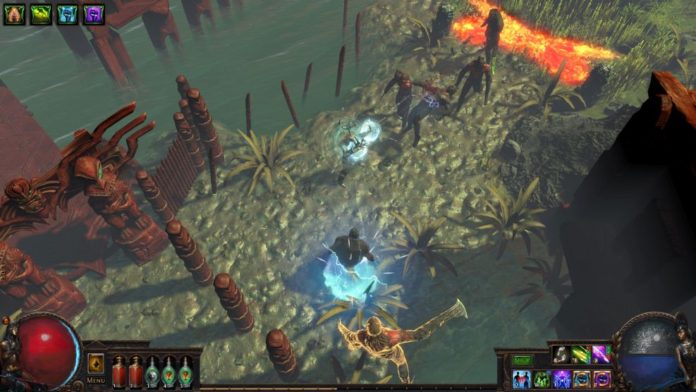 In Path of Exile, to level up quickly just one thing is needed, efficiency. Someone in a Reddit thread pointed out that ‘Going through the content fast is a result of a lot of little things done to maximize efficiency.’ Then they list some examples such as streamlining quests (to avoid unnecessary content until later) and pathfinding (finding the fastest way to get from point A to B) or playing in a group.

Leveling up fast boils down to thorough planning. Plan out which quests to take, how to get there, and the enemies to defeat. Knowing which items to level up and collect will also help to keep your inventory clutter-free, which results in less time spent cleaning it up.

Optimize your gear to kill most packs in one to three shots, with bosses being just a few more over that number. Along with that last one, choose a skill that will synergize well with your gear and boosts your mob and boss killing proficiency. Lastly, don’t pick up anything that you won’t be able to sell or use, as that will save you time from trying to dispose of it.

Additional Guides and Information
Many other players have guides for these kinds of things. Here’s one focusing on what quests to take for collecting skill points and gems. The Reddit thread above might also help your planning, as another comment there describes the process of how they reached 100 in Perandus SC.

Then, here’s another Reddit thread discussion about a video that recommends the best leveling zones as well as a step-by-step guide to level 70. To summarize that one, the main thing to remember is to be slightly under-leveled for what you’re going to. The commenter also lists the best zones for leveling as well as a guide and recommended side quests.

Last Words
If you’re the type to want to amass wealth in a game, that’s not very easy to do in PoE. That’s because of the itemized money/trading system. An itemized money/trading system means that in-game trades are not done with money, but with items (aka barter). What is commonly labeled as PoE currency is a set of standard items that usually have the effect of changing another item’s characteristics, but not always.

Then again, nobody can tell you how to enjoy the game, so figure out how fast you want to level up. You don’t have to follow everything in this article (or in the other guides) to the letter unless that’s what you want to do. At any rate, games were made to be enjoyed, so find the best way you can enjoy Path of Exile. After all, the fun in a journey is not in the destination, but in getting there.

Hope this helps and that you enjoy the game!