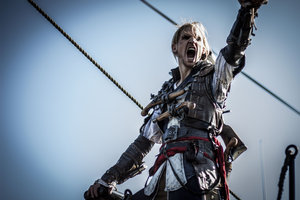 Development for Assassins Creed IV: Black Flag on current-gen consoles was a ‘nightmarish’ experience for Ubisoft developers. Game Director Ashraf Ismail, in a Reddit AMA session, answered questions regarding his experience developing the fourth AC game for the PS3 and Xbox 360. Despite the last-generation versions of AC IV running almost as smoothly as next-gen versions, Ismail did admit it was no easy task making it that way.

“Development on both consoles was very smooth since they are both very similar to PCs,” Ismail stated regarding the Xbox one and PS4. “Last generation was very difficult and even nightmarish.”

Ismail did state however that they ran into some difficulties with developing for the Xbox One and PS4, as both Microsoft and Sony were still figuring out their consoles requirements.

“The one gray area was understanding both Sony and MS requirements for the consoles,” Ismail said.

“They were trying to figure them out themselves.They do understand them NOW,” Ismail explained later. “One year ago as they were still trying to push features and tech it wasn’t so clear. And this is normal.”

Ismail concluded his session by stating that the AC IV development process was the best experience of his career.

“Best game development experience of my career. Team was great, production was the smoothest I’ve ever seen, no one got burned doing overtime and super proud of the result! Its been absolutely wonderful,” Ismail added. “2.5 years to make a game is perfect! Longer than 3 years can start wearing a person down.”

The game is currently available for Playstation 3 and Xbox 360. It will launch alongside the Xbox One and PS4.