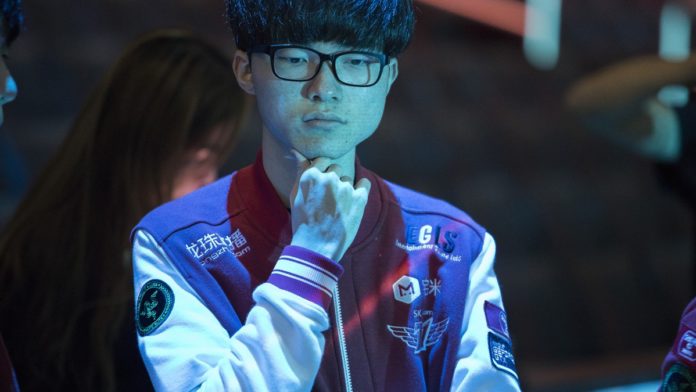 The famous player is Lee “Faker.” Sanghyeok from South Korea. This 22- years old player was pulled from a solo queue by SK Telecom organization to make the team against him in the mid lane. His actual in-game name – Hide on bush – quickly become one of the most watched ones due to his items pick and amazing playing style.

The team made against him comprised of some other famous players namely: Impact, Bengi, Piglet and PoohManDu to surround him in the mid lane. This team was revealed in February of 2013. They did qualify for the OGN OLYMPUS CHAMPIONS SPRING 2013. 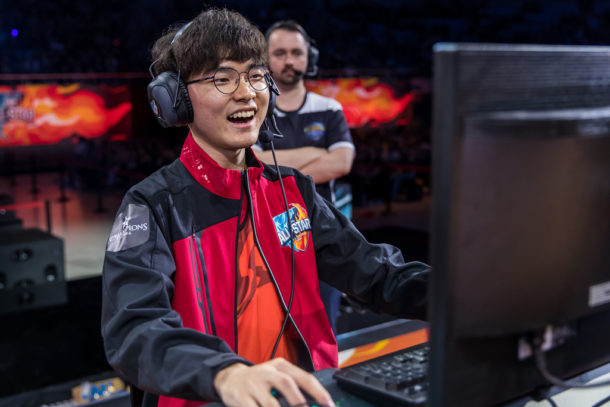 All expectations were met and after qualifying,SKT won the championship on 3rd place. They lost finals to MVP OZONE at 3-1. Faker’s exceptional performance put him to the place of the best mid laner in the world right after this one tournament. This team was renamed to SKT1.

After this tournament, they also attended HOT6iX Champions Summer 2013. In this championship, Faker continued with his amazing game and proved his leadership skills too and reverse swept KT Rolster Bullets.

The Faker’s Rise To Fame

Hide on bush along with his team won season 3 Korea regional finals, and again Faker’s team beat KT Rolster Bullets to 3-1. They entered the Season 3 Korea World championship. Not only did they enter they won the whole tournament.

Faker literally crushed the tournament with his team and put an impressive score of 15-3. This set a record across the tournament. This led to a final against Royal Club at 3-0. Hence they became the new world champions.

Faker showed spectacular play across the season, and it earned him immense respect, fan following, and what not. His fans across the world gave him the title of the best player of the year in 2013.

Now those are achievements and starting journey of Faker. Someone who made a name and earned a lot of value in his field at a very young age. Something which is very rare to see. This was all just beginning of his rise. Just the first step towards what all was going to come in the following years.

So the new season started, and it started even better for K team at PANDORA TV CHAMPIONS WINTER 2013-2014. We don’t even need to cut the story short. The story is short. They didn’t lose even a single battle throughout the tournament. They won every single battle. This was the best thing ever seen in the world an OGN tournament.

Faker swept SAMSUNG OZONE and earned the little of the greatest LoL player in the world.

Some bad time for K team after ManDu fell sick and was replaced by Casper. This resulted in a poor play in HOT6iX championship in 2014. K team was crapped off to a loss of 3-1 to OZONE in the quarterfinals.

Good time started again after ManDu rejoined before All-Star Paris 2014 where the team was expected to falter. In their typical fashion, they clean swept the whole tournament. Earned a clean record of 9-0 and dominated the finals against OMG.

HOT6iX Champions Summer 2014 wasn’t successful and mirrored the same results as its previous season. Losing to Samsung white at 3-1 in the quarterfinals.

The OGN rules changed, and it forced K and S team to merge. The new team was now called SK Telecom T1. Most old the old K Roster was removed. Only Benji and Faker were left behind.

Easyhoon and Faker played together in the mid lane in SBENU Champions Spring 2015. It disappointed fans of Faker. The team did not succeed in this championship.

The SK Telecom T1 made to the 2015 Mid seasonal Invitational. Their performance wasn’t as expected by the fans of Faker, and they lost in the semifinals to Europian Fanatic.

After Mid Seasonal Invitation SKT bounced back and won the regular season of Champions Summer. Faker played 12 unique champions in his 29 games. He made Irelia which is a pick up that would become a relatively popular off-meta pick up around the world, and Master Yi a pick that would not.

SKT was now finally making its way up again. They went undefeated in the world championship beating AHQ eSports Club and Origen in the playoffs along the way. They came across KOO Tigers in the finals and also made them so defeat by beating them at 3-1.

In 2015 Faker became one of the three people who won World Championship twice. The other two were his coach karma and Benji.

It had just been 2 weeks since the world championship that KST team qualified for LOL KeSPA CUP. SK Telecom re assigned Faker after the tournament. Therefore, in March SK Telecom decided to attend IEM Katowice even that they were only sixth-place LCK team by then.

Since they won the first place in the spring season, it won them a spot in the 1026 Mid-seasonal Invitational. So, the SKT1 was the only team that made to 2016 MSI from 2015 MSI.

Now in 2016 LCK Summer Split. The team started the season with a smashing score of 5-0 and 10-0 game score. After losing some games after this, they failed to win from Afreeca Freecs. Not even a single game could be won against them. They came second in the season with the series score of 15-3.

In the 2016 Season World Championship SKT1 were placed in Group B, alongside LMS’s Flash Wolves, NA’s Cloud 9, China’s I May.

Fake signed a contract again with SK Telecom T1 based on an offer of about $2.5 Million. In 2017, he also did a stream on Twitch that had more than 245,000 visitors and was a record at that time – a record broke in 2018 by loltyler1, the famous League of Legends Flamer…erm.. player. But in 2017, the SKT domination ended. They were destroyed 3-0 by the Samsung Galaxy players.

The following seasons failed to bring back the old glory – but Faker is still at SKT in 2019 after signing another three year contract and we could probably see them again in finals.

Fake is now earning around $4.5 millions annually according to some data. This is like hitting a huge jackpot using a first deposit bonus for Australians – but he gets it annually. Of course, being a professional gamer means that you can have 1-2 years when you’d earn this money and afterwards you’d earn probably 5% of it. But at least 2-3 years like that is enough for retirement.

If you liked this piece, you may want to check other iOS and Android games like League of Legends.