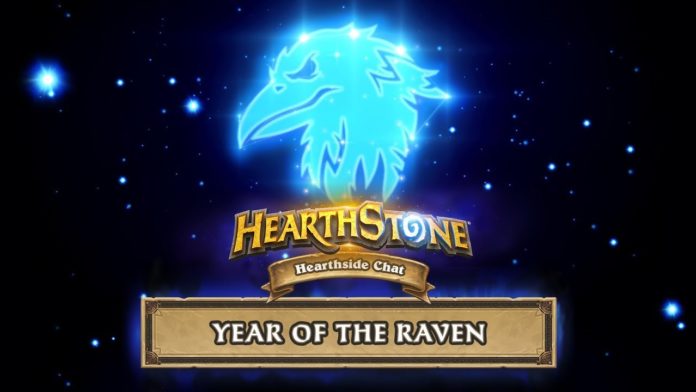 Now that the final set from year of the raven has been out for a few months let’s take a look at the best cards to craft for your collection. I will only be listing neural cards here as they can be used across all classes which I think gives them greater value than class cards even if they’re less powerful 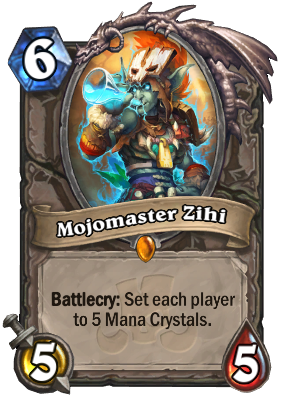 Many Hearthstone players hate losing to combo decks as often you feel helpless as they one turn kill you. If this is you then you’ll love “Mojomaster zihi”.

Its battle cry reads “set each player to 5 mana crystals”.

This essentially makes Zihi an anti-combo card as many combo decks require 9 or 10 mana to pull off there combo, such as any Mechathun combo.

As its likely they’ve already spent a lot of resources staying alive the extra 3-4 turns this card buys you can often win you the game. 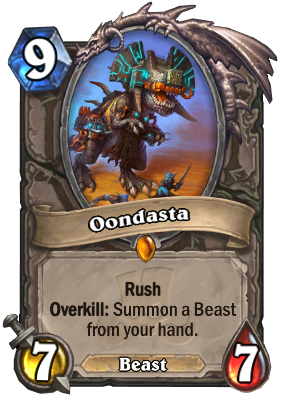 Oondasta’s overkill of summoning a beast from your hand is often an extremely high tempo play.

The overkill quite often gets to activate too as the card has rush.

Pulling something like a “king crush” from your hand for 8 charge damage or a “witchwood grizzly” for a 3/12 taunt can be game swinging.

Before the rotation, it can also be used to cheat out “Tyrantus” which can cause major issues for your opponent. 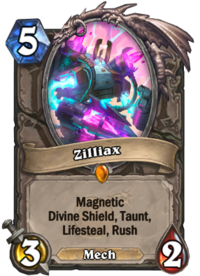 By one of the most universally useful cards in the game “Zilliax” currently boasts a 34% deck inclusion rate (from HS replay).

That is crazy high. He’s so good because he does a little bit of everything.

He often heals for at least 6 health can remove a threat with divine shield and rush and still be sitting on the board with taunt.

There’s also the added bonus of it having the Boomsday projects keyword “magnetic” making him even more effective in mech decks. He describes himself the best “unity, precision, Perfection”. 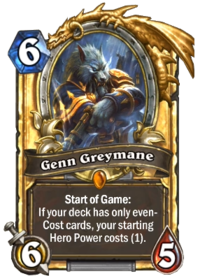 This one card has spawned at least 3 tier one decks in even: Paladin Shaman and Warlock.

The consistency of always having something to do on turn one proves to be very powerful.

Even warlock is particularly fun to me has there’s nothing more satisfying that getting a turn three “mountain giant”.

Although it is likely that even decks may be slightly less powerful after rotation due to a smaller card pool to build your deck from I can’t see Genn not being a great card still. 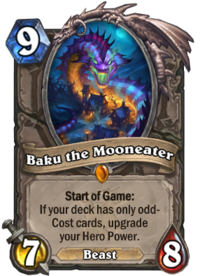 If you’ve played Hearthstone anytime since the release of the Witchwood you’ll have known that this would be the top spot.

Odd paladin has been a tier one deck for pretty much all of the past year, many players predicted that it’d fall out of the Meta after the “level up” nerf but it has pretty much retained its power.

But it’s not just paladin that can make great use of Baku, since the release of “supercollider” with the Boomsday project odd warrior has been popping up in tier one every so often. Odd rogue has also been a force to be reckoned with, being in tier one or two for most of the year.

More recently we’ve seen how odd mage has been quite strong too with the help of “daring fire eater”. Hunter was also able to have reasonable success with odd decks just not to the same degree as the other classes mentioned.

For players on a shoe string budget “Whizbang the wonderful” is a wonderful craft. For the price of one legendary card you get to play with 18 different decks. When Whizbang is in your deck at the start of the game you’re given a random deck to play from the deck recipes, this excludes the classic only recipes. The best thing about Whizbang is that because the recipes change each expansion you can try out new cards before you craft them by playing with him. It’s also worth noting that if you have a golden Whizbang you’ll be given a fully golden deck!

This is a guest post made by Josh Malcolm. When I’m not playing games, I’m playing with my little dog Monty (you can see him on my Instagram @josh.malcolm14).My favourite games of all time are: all the borderlands games, 2 especially, mount and blade: war band and the extremely obscure robot wars extreme destruction. I’m currently enjoying the excellent apex legends and Hearthstone. Another hobby of mine is trampolining, people are always surprised when they see I’m actually quite good at it.