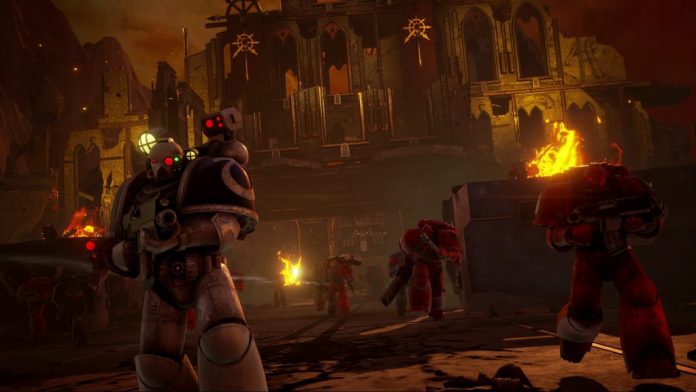 Great news for the fans of the long-running Warhammer 40,000 series! Bandai Namco and Behavior have announced that the next title in the franchise, Warhammer 40,000: Eternal Crusade, is coming to PC, PS4 and Xbox One this summer. So… will it be a solid real time strategy game? A deep RPG? No! This will be a massive online shooter game and some voices in my head are starting to feel that it will give Star Wars Battlefront a run for its money if it’s done right. And why shouldn’t it be done right?

Based on the multimillion-selling and extensive universe of Warhammer 40,000, Eternal Crusade will take gamers into a vicious battle between four factions of the 41st millennium in order to control a persistent world at war. Whether it is PvP (Player versus Player) or PvE (Player versus Environment), squads will have to work together and engage in massive battles in order to exterminate the other factions. To do so; players can choose from twenty different sub-factions, earn hundreds of weapons, customization options and accessories drawn from 29 years of Warhammer 40,000 lore to create their perfect warrior.

An exact release date hasn’t been announced, but “summer 2016” is not that far away and hopefully we’ll get the chance to beta test the game even sooner than that. Well… PC gamers certainly have as the game is already available on Steam Early access and it currently has glowing reviews from the community. So things are looking good so far and I am sure that Warhammer 40,000: Eternal Crusade will be a great game!