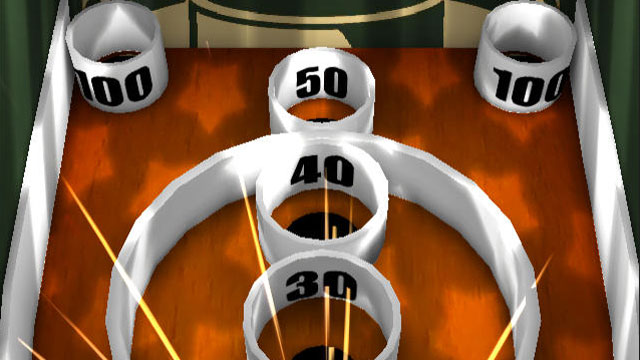 In the world of iOS gaming, classic arcade games are incredibly popular. Games like Pac-Man, Tapper and various pinball machines have become apps, allowing players to take the arcade experience on the go. But what about other arcade staples? Skee Ball, a popular game in most arcades, has found it’s way to iOS systems as well. I am a huge fan of skee ball, so I have played a lot of iOS skee ball games. Two popular games have taken the joy of skee ball and brought it to your mobile device: Mobage’s Arcade Ball and Warner Bros’ Midway Arcade. In the virtual skee ball world, which game is better?

Midway Arcade is known for more than just skee ball. Players can go through a full arcade of games, such as Joust, Spy Hunter, and Hot Shots Basketball. Playing games earns players tickets, which unlocks virtual prizes. Now we’re not talking about this game because it has some nostalgia to it. The game comes with a skee ball game. The game play is simple: aim then swipe. At first, the game presents some what of a challenge as you try to figure out the physics system. However, the game is easy once you are experienced. Players can easily aim and get all 9 balls into the 100 point hole with a lot of ease. So for people just looking for a skee ball game, Midway Arcade isn’t it. However, if you’re looking for something a bit extra, definitely try this game for the variety of games included. The skee ball is just one of many games included. Midway Arcade can be found here on the App Store. The game includes in-app purchases, but if you’re in it for just a quick game of skee ball followed by Spy Hunter, you can ignore them.

Mobage enters the mobile arcade world with Arcade Ball. This game is just straight forward skee ball action. Players can play solo or against other players, trying to earn tickets to get prizes. What I love about this game is it includes human error into it. Players can aim and swipe where they want the ball to go, but the game allows players to tilt their device, allowing them to add more precise aiming with the ball while giving it some spin. Tickets and tokens are earned through playing, buying prizes and power-ups respectively. The great thing about this game is the prizes can be used in game. Prizes include icons you can use when you play multiplayer, as well as new balls and lanes to change up the look of the game. Arcade Ball is clearly the winner in this battle of virtual skee ball games. In more awesome news, players can get this game for free on the App Store. The game includes in-app purchases to buy additional tickets and tokens.

So in conclusion, Arcade Ball is clearly a better choice for some on the go skee ball action. But players looking for a little bit more can pick up Midway Arcade for some nostalgic arcade fun.