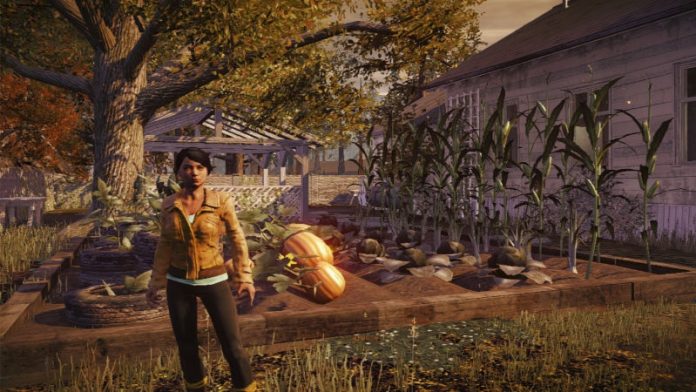 Currently available only on XBLA (with a PC version coming) State of Decay is a CryEngine 3 based zombie apocalypse survival game set in an open world, with a focus on surviving your way. Undead Labs has used the word “ambitious” quite a few times, and that doesn’t seem to be an overstatement. Decisions are permanent, and management is key. It’s foundation of a role-playing game, once you dig in, is pretty great as well.

The game drops you in with no outset tutorial, so from the get-go it lets you know what kind of tension it plans to instill. The story, while minimal up to this point, puts you in the shoes of a small group of people on a camping trip when the outbreak happens, adding some more followers as the game progresses. There is a small management sim built in, as in you have a “home” where your group of survivors stay, and have a morale to maintain with stockpiles of food, etc. Each playable, and nonplayable, character has specific skills and traits that make them unique, but each character can totally hold their own. Slashing through zombie hordes, jumping through windows and stomping on their heads are all things to expect, so long as you have the stamina to function. You can also barricade windows and hunt through abandoned houses for supplies.

Don’t count out those zombies, though, the hordes are not to be taken lightly. They can run, they can climb, they can break down doors, and when you hit them with your car they can hang on and cause all kinds of trouble. Around the town there will be hordes and infestations you are tasked with taking down in order to save, well, everyone. Sneaking around them is a good idea, because once they’re alerted they really want to play with you. Currently, in my game, the hordes are heading towards our home, which should have an interesting outcome.

I’m still early in the game, so don’t mistake this for a review, but the early indications from the game are pretty great, and dare I say ambitious. The combat is a little rough, framerate is not great at parts, and I’ve run into a few glitches regarding zombies clipping through any and all objects, but it’s not enough to detract from the experience. It’s not a perfect game, but for $20USD (1600 MS points) it’s a surprising experience which I completely recommend. It toes the line between The Walking Dead, DayZ and Dead Rising very well. At the very least, check out the trial version, you just might fall in love, too. Or, if you’re still on the fence, be sure to check back in the coming days for a full review.